Last week I forgot to say Mazel Tov to Jon Ossof, Georgia's first Jewish senator, and now the youngest member of that august group.  I remember when I was appalled to realize there was a Supreme Court justice my age and now there are senators younger than my children.  Even so, I still feel younger than Springtime.

Here's a favorite artist/writer who showed up regularly on the cover of the New Yorker-one hundred and twenty times, over the course of seventy-three years.

Here's his cover for May 9, the very day my dear cousin Kate was born.  (Don't worry, Kate, I photo-shopped out the year.) 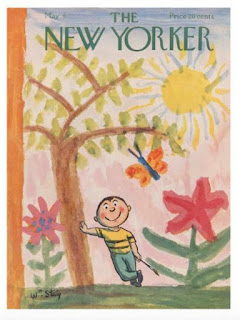 William Steig's art is wonderful but his writing is sublime. At the age of sixty, in a move to make money, he began to write for children.  His most famous book is probably Shrek, the horrible ogre who lives happily ever after, because it was made into a movie.  But there's Dr. DeSoto, a mouse dentist who can't refuse to treat a fox with a toothache, but must find a way not to get eaten. There's Tiffky Doofky, my son Sam's favorite, about a gentlemanly dog who's a garbage collector.
My favorite, with writing so beautiful I took it to my writing workshop when I was asked to bring in something that inspired me, is Amos and Boris. 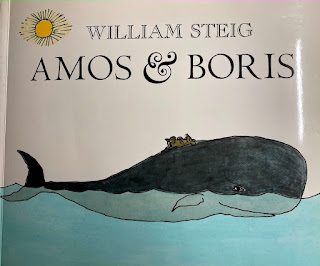 Amos is a mouse who lives by the sea.  He builds a boat, names it the Rodent, and sets sail. 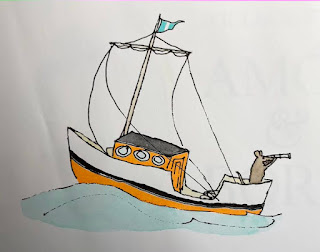 Listen to this:  "One night, in a phosphorescent sea, he marveled at the sight of some whales spouting luminous water; and later, lying on the deck of his boat gazing at the immense, starry sky, the tiny mouse Amos, a little speck of a living thing in the vast living universe, felt thoroughly akin to it all.  Overwhelmed by the beauty and mystery of everything, he rolled over and over and right off the deck of his boat and into the sea." 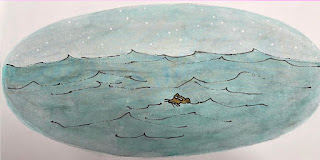 At this point, Molly, age four, listening to me read, said, "Uh oh."
Just as Amos is wondering what it will be like to die and if there will be other mice in Heaven, a whale breaks the surface and looms over him.  It's just like that scene in Castaway when a whale comes right up to Tom Hanks' raft to get a look at him.
When Amos tells the whale that he's not a fish but a mammal, the highest form of life, the whale replies,
"Holy clam and cuttlefish!  (How I would love a reason to say, "Holy clam and cuttlefish")
I'm a mammal too!  Call me Boris." And Boris agrees to take Amos home.
As they travel along they become "the closest possible friends and developed a deep admiration for one another."
Here's the part I love;
"Boris admired the delicacy, the quivering daintiness, the light touch, the small voice, the gemlike radiance of the mouse. Amos admired the bulk, the grandeur, the power, the purpose, the rich voice, and the abounding friendliness of the whale."
When they reach Amos's home they pledge to be friends forever, even though they can't be together.  Amos thanks Boris and says, "If you ever need my help I'd be more than glad to give it."  Boris laughs to himself, "How could that little mouse ever help me?  Little as he is, he's all heart. I love him and I'll miss him terribly."
Well, the time comes, after Hurricane Yetta, when Boris desperately needs help. I won't spoil the ending for you. Give yourself a treat and go to your nearest independent bookstore and spend a happy hour in the children's department-maybe spend a few bucks there, I'm sure they'd appreciate it.
Just so you can sleep tonight, I'll tell you that Amos is extremely clever.
Steig's daughter, Maggie Steig, said about her Dad, "His essential self was a great appreciator.  When he looked at nature, when he looked at animals, when he looked at people he loved, his look always said, 'You delight me.'"
He's another one I wish I'd known.  I"m so glad his work lives after him.
at January 15, 2021 1 comment:

Moving on from Here

What did I say last week?  It has to get better doesn't it? OY VEH!

"Darkness cannot drive out darkness: only light can do that.

Hate cannot drive out hate: only love can do that."

Then he said in his own words, "Let each of us try to be a light to see our country out of this dark time."

After he's sworn in will we refer to him as the Reverend Senator?

Now let's talk about me. Work is progressing on my new drawing, Red House, 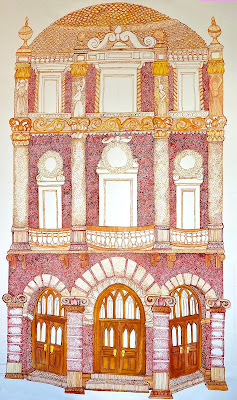 but I've taken a rest because I don't know, or I haven't decided what to put in the windows.  While I think about that I've started a companion piece, the interior of the house. Here's the ground floor--maybe it's the reception hall. I want to give it a checkerboard floor but I have to put in some characters first. 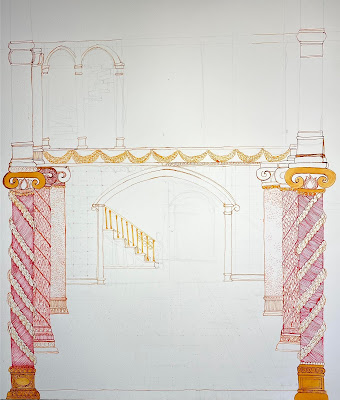 Here's my question;  who should I pick to inhabit the Red House? How about European Royalty? 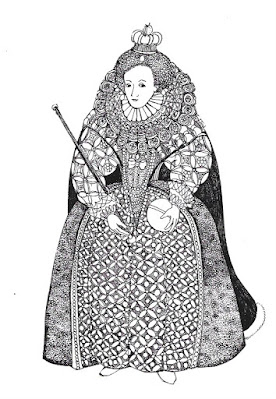 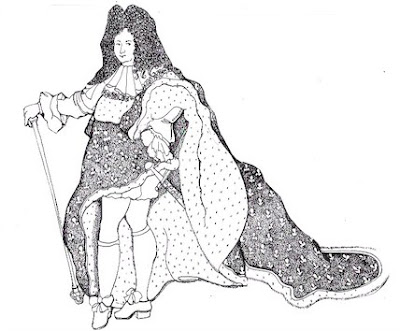 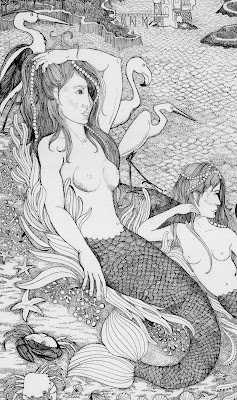 A couple of mermaids? 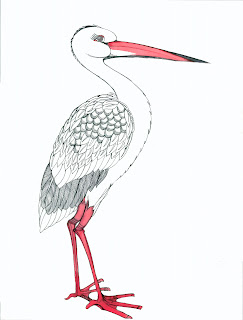 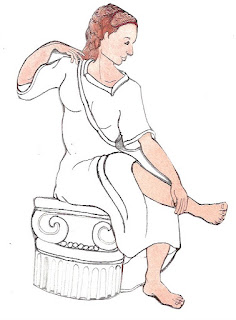 What do you think of her? 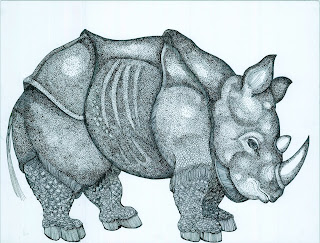 I can't go wrong with a Rhino.
It's a big decision and I'd love your input.  Maybe you have another idea? I look forward to hearing your thoughts.
at January 07, 2021 No comments:

"We’re coming to the end of a year that’s been so hard for so many of us, full of discord and fear for our neighbors, our leaders, and the planet, our home."

I had no idea how bad things could get.  It's like the fates or the Universe or whatever forces might be said, "You think that's rough? I"m just getting started."

Here's what I wrote then.

But there have been hard times before this. I have a Christmas card sent by my grandparents, probably in 1944, in the midst of World War II, when Hitler raged across Europe.  The picture on the front is a church window with advent candles on one side and an American flag on the other.  Through the window, we see the star of Bethlehem.  Inside, the message has those familiar words from Luke; “For unto us is born this day in the city of David…” and “Thanks be to God, who giveth us the victory…”

But the light shines in the darkness and the darkness has never put it out.  They got through their hard times and we’ll get through ours. We’ll learn from our mistakes and try to do better. We’ll work together to seek solutions.

That was two years ago.  Have we worked together to seek solutions? In November we voted in unprecedented numbers--that's a start.  Working with the League of Women voters, my friend, Marla, and I went to a Girls' High School in Harlem and met a wonderful group of brand new citizens; that was not only fun, it was inspiring.

And the vaccine is coming!  And the days are getting shorter!

So let's not give up hope, and let's not stop moving forward. 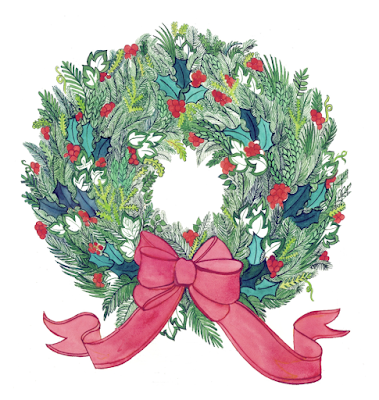 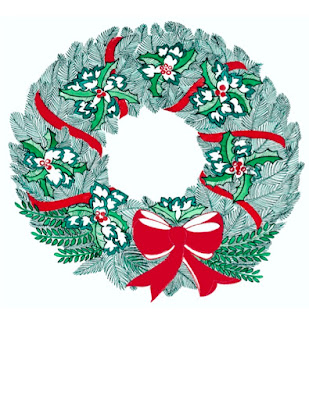 Good Morning!  I'll make this short because I know you want to open your presents, get the turkey into the oven, start the family Zoom call--it's a big day. 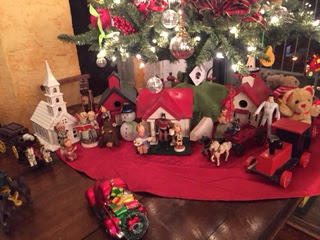 Here's one of my favorite Christmas stories. My brother Alan tells about one very special Sunday School Christmas pageant.  The little boy who played the innkeeper had rehearsed plenty of times and he knew his lines but at his cue, when the weary Mary and Joseph came to his door and pleaded for shelter, instead of turning them away he opened the door and said,

Everything came to a halt and they had to start over, and again he flubbed his line; he followed his heart and welcomed the strangers.  Again, everything stopped.

On the third try, the play proceeded as written. The director, who was also the mother of the little innkeeper, was mortified but I hope she was able to keep in her heart a bit of pride that she had raised a warm-hearted and generous boy.

I think he actually got it right. 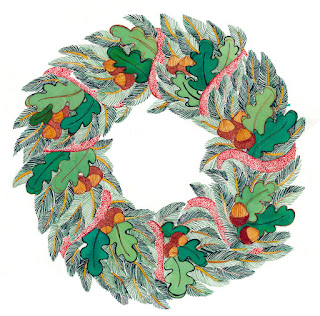 Some Progress and a Couple of Diversions

Here's the next stage in the work I showed you on December third. 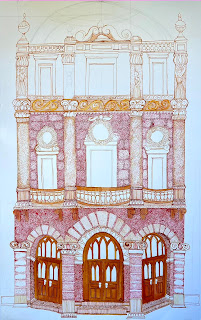 I've filled in the red bricks on the second floor, the gold railing for the third floor, and I've almost finished the caryatids holding up the roof. I'm glad I'm writing this and not speaking it, as I've never learned how to pronounce that word.

It's taken longer than I thought it would because I took some time off to work on a new wreath. This won't be finished by Christmas but it's putting me in the mood.I rescued a beautiful boxwood wreath  from the trash last year and I've been meaning all year to put it down on paper. 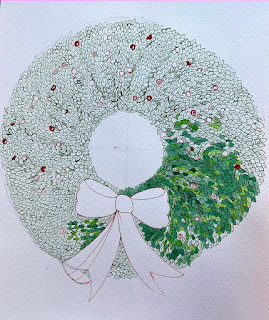 Maybe next year it'll be a Christmas card.

Back to the Red House--and the roof is up! It's cropped off a bit--I always push the edges of the paper.  May I can add something on photoshop.  It's coming along. 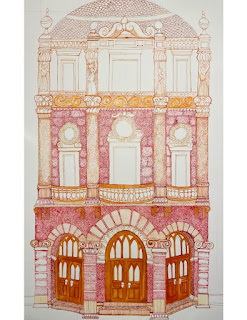 I like having two pieces going. In making all those little dots-my hand moving almost automatically and my mind wandering--I came up with my next piece.

Years ago I spied in a shop window in a village in Italy-either Montepulciano or Arezzo, a scarf that absolutely sang to me.

"Arthur, I have to have that scarf!"  and Arthur came through. 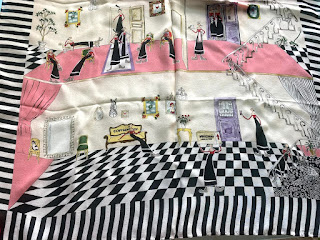 Six feet of filmy silk depicting a great house of eight stories and staircases, inhabited by an army of Olive Oyl figures.  I love the fifties Elvis in the Malt Shoppe vibe of the black and white and pink color scheme and the checkerboard floors.

This will be the interior of the red house.  I can't wait.

Christmas is almost here so let's start celebrating with a song from the choir of  the First Presbyterian Church in the City of New York.

As a reminder, if you would like me to send you a copy of 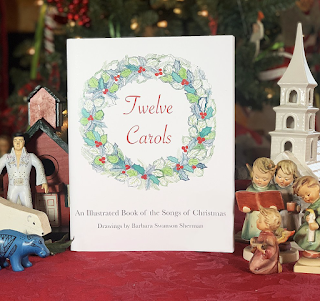 My book of Christmas Carols, I'll send it to you for the cost of shipping.  Just click on this link;

We have so much to celebrate so...Enjoy! 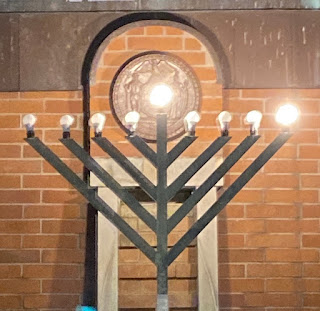 Everyone can celebrate the story of a light that did not go out.

This little light of mine...

"I like the cracks-that's how the light gets in." Leonard Cohen 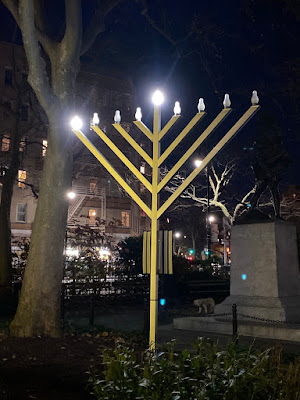 What a year, and how we need light and lightness.  On November 7 when New York City erupted in horns honking with joy and all the church bells in Paris rang I felt a mix of relief and hope for the coming year.

But I know that there are many who now feel the way I felt at this time in 2016. How do we proceed from here?  How do we find a way to work together after all that's been said?  My church is holding discussions with the book, I Think You're Wrong But I'm Listening.  Maybe that's a start.

Maybe we could take a line from a beloved carol;

Now hush your noise and cease your strife

and Hear the Angels Sing