Showing posts from October, 2018
Show all

Why do I like to draw the rhinoceros? My figures, animals or humans, have a chubby, cuddly quality.  Even my old people look like children. If I were to draw puppies and kittens they would be sickenly sweet.  I look animals with some grit, that don’t look cute. That led me to the Rhino. I had been thinking about rhinos for years since I found this  picture in the Daily News.  Four rhinos walking down a road, just ambling along--four dudes out for a walk.  Isn’t the rhino a solitary creature? Not according to these guys. I don’t know where they were or what they were up to. They look so companionable. They look like the bandidos in The Wild Bunch or George W. Bush, Dick Cheney, Donald Rumsfeld and Condoleezza Rice strolling down a road in Texas, but nice. You can see by how yellow it is that I've saved it for a long time.  I  wanted to do something with rhinos but I knew my draughtsmanship wasn’t up to the task. So I practiced, I think of the Rhino as a plodding heavy
Post a Comment
Read more 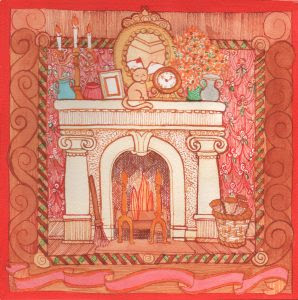 When I complained to a friend at work about having to plan dinner yet again she told me the tale of the little table. It seems all you had to do was clap your hands and say “Come, Little Table, come!” and a table would trot in, beautifully set with a delicious meal. When you’d eaten your fill you just clapped your hands and said, “Go, Little Table, go!” and it would trot off to wash the dishes. “So,” I said, “where do I get one of those little tables?”    The closest I could come was to make a drawing. Then when Jessie was about three she asked me as we were walking in New York City, “Why don’t homeless people just get jobs?” I took a deep breath and said; “Well... what do you need in order to get a job? First you have to go on a job interview.    You should be rested so you need a bed. You have to be clean so you need a bathtub. You should be well-fed so you need a stove and a table. We came to the conclusion that to have a home you need a job-but to get a job you need a home.
Post a Comment
Read more
More posts