Showing posts from March, 2019
Show all

I have a long and diverse list of artists who have inspired me, like Georgia O’Keeffe, Edgar Degas, Wayne Thibaud, Hans Holbein, Hillary Knight, Alexander Calder…and Aunt Connie. Aunt Connie  was an artist whose canvas, her magnum opus, was her house. Aunt Connie and Uncle Tut once had a summer cottage by the sea in Westhampton Beach, Long Island.  The great hurricane of 1938 washed away that house and even the land it stood upon.  All that was left was a bucket and an old bookcase. They believed it was the Lord’s doing that they and their children were safe in New Jersey when the storm came, so when they found a house near us in Sag Harbor they named it “Grateful Haven” and took as their motto the Bible verse Matthew 7:25; “And the rains descended, and the floods came, and the winds blew, and beat upon that house; and it fell not: for it was founded upon a rock.”     Durrell and Constance Tuttle, and their children, Bette and Porter, became our family’s closest neighbo
Post a Comment
Read more 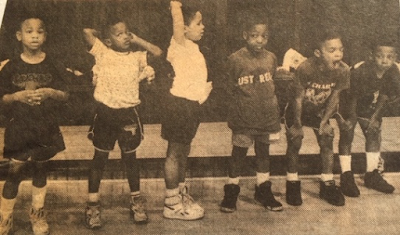 Is it really time for March Madness? The NCAA Division I Men’s Basketball Tournament begins next Tuesday so basketball is on everyone's mind, even mine. Remember the little black books I wrote about a few weeks ago? I pulled out these two pictures from 1991. These little athletes are playing in New York City’s Junior Basketball League. Then look at this shot, the starting lineup of Duke University’s basketball team. The caption says “Duke’s starting five, Carlos Boozer, Mike Dunleavy, Jason Williams, Chris Duhon and Dahntay Jones, can be an imposing group.” Arthur tells me all five went on to careers in the N.B.A. They could be the little guys all grown up, although they’re not; the two pictures were taken around the same time. Looking at these two photos together makes me think of the Sugarplum Fairy. Stay with me here. In the second act of Balanchine’s Nutcracker, the Sugarplum Fairy dances surrounded by her court of young dancers, students of the A
Post a Comment
Read more 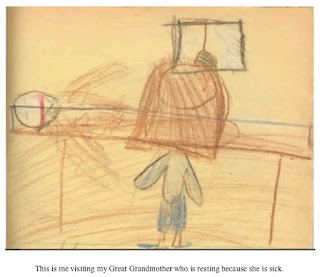 This is how Jessie described a visit to my grandmother n her school journal. My grandmother, we called her MomMom, died early in the morning on my Jessie’s 7th birthday. We were staying    at her home at the time, and after several hours of phone calls and business, after the doctor and the undertaker had left, I looked at Jessie and thought, this little girl needs a celebration. So I drove to town to buy a cake, then went to the party store and bought 7 pink balloons and one purple to grow on. I headed out the door. The spiky chandelier in the entry way caught a balloon and  POP!  I went back, they replaced it for free and I headed out again, this time holding my bouquet very low. On the street I passed a woman with a lit cigarette and  POP! I went back to the store and this time I paid for the replacement. I headed out again, holding the balloons in a tight cluster. As they rubbed against each other, they heated up, the air and helium inside expanded and  POP!
Post a Comment
Read more 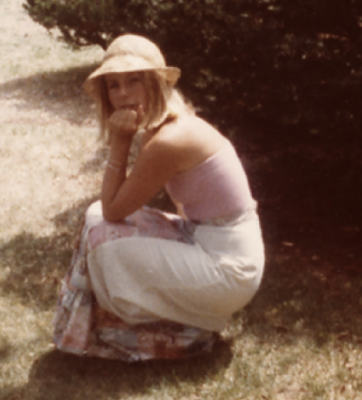 Yesterday was the birthday of my friend, Valerie Bessette.     She and I went to High School together. Val was petite with silvery blond hair.  She played the Good Witch Glinda in our High School production of the Wizard of Oz.   The next year she played the lead in Booth Tarkington’s Seventeen.  Her character carried a tiny dog wherever she went, but nobody in Vermont has a tiny dog--the closest we could find was a forty pound poodle.  Val made her entrance buried under that dog with perfect aplomb.  And that was her way--she could handle anything.     The summer we were twenty-one I was languishing in Stowe with a bad boyfriend, a pile of debts and no plans for my future.  Valerie came home from New York City where she’d been going to Parson’s School of Design.  She was living my dream life.     She suggested we take a day trip to an art gallery in the next town. Just getting out of town opened something up in me.  I remember one painting, a huge abstract with squares
Post a Comment
Read more
More posts