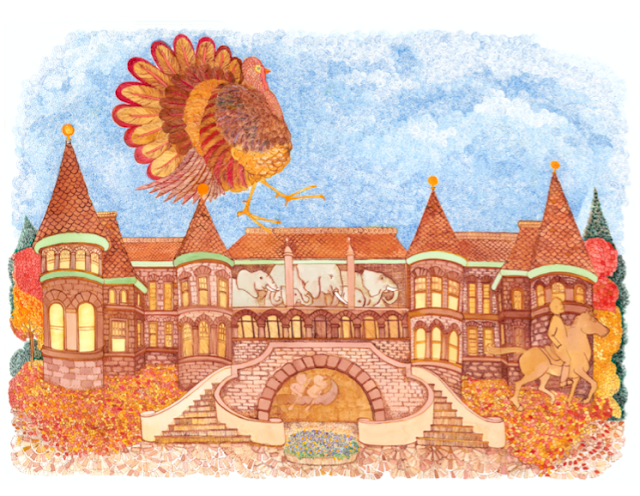 Thank you for all the nice responses to my Thanksgiving in New York City.  Here are some thoughts I had as I drew it, and as I look back at it.

This is the south facing side of the American Museum of Natural History on 77th Street Between Central Park West and Columbus Avenue. I took some liberties here; you can’t actually look in the windows and see the great herd of elephants.  They stand in all their glory in the Hall of African Mammals.  While I’m grateful that they are preserved for posterity I can’t help knowing that those beautiful creatures would have much preferred to live out their lives.   I imagine the terror they, especially the baby, felt as the guns roared—maybe his mother died first and he was left alone. I’m appalled at pictures of hunters gloating over dead animals.  I often say, “Couldn’t you just look at the animals?  Why do you have to kill them?”  But here I am gazing in wonder at the results of that carnage, so grateful that they’re standing still so I can draw them.

Then there’s the statue of Teddy Rosevelt standing in the center of his memorial on the Eastern facing side of the Museum. His figure, heroic on horseback, is flanked by two men on foot, an African and a Native American.  They were intended by the artist to be allegorical figures of Africa and North America, expressing TR’s love for the two great continents and his friendliness toward all races.  Today they make us cringe at the implicit racism. The same work of art seen in two different times evokes very different responses. I decided not to draw the two men.  Was that the right choice?  Should I have honored them by not ignoring them or would I be seen as racist as well?

Many of the exhibits inside are the result of TR’s hunting trips. He was responsible for the death of thousands of animals but as president he preserved thousands of acres of wilderness as National Parks, including Yellowstone and the Grand Canyon. Again, I’m torn. Ambivalence is hard to live with. I try to accept that most people do the best they can with what they have within their own time and place.

My drawing is all about Thanksgiving Day and the great parade.  Again I took liberties; there’s no actual turkey balloon but it was right for the picture. I wanted to honor this day, this event and the thousands of people who work all year to make it happen. How does it all come about? Who thinks up new characters for the balloons? Whoever thought of giant balloons in the first place? What are those great workshops like? How do you make a giant Charlie Brown?

I think of the ones staying up all night to inflate those balloons and then keep them safe ’til morning, the marchers who hold the balloons tethered to earth. Then there are the high school bands who come from all over the country—how do you play the trumpet in 30 degree weather? Or march and twirl a baton in a skimpy but not too skimpy costume?

And who keeps us all safe?  Last year only a few weeks before Thanksgiving there was an attack by a van driven into bicyclists in lower Manhattan.  We felt tense but the city workers, the police, sanitation, and fire departments were all on hand to keep traffic and the parade moving.  Garbage trucks were parked at all the cross streets like giant guard dogs so no vehicles could spoil the fun.

I can get a little teary thinking about all the thought and work and expertise dedicated to make this wonderful and slightly silly event happen.   Maybe not so silly.  It’s a celebration of the day we set aside to give thanks and what’s more important than that? I’m grateful for a great deal, including how complicated life can be.
at November 26, 2018

Email ThisBlogThis!Share to TwitterShare to FacebookShare to Pinterest
Labels: Thanksgiving