In the spring of 1970 I heard about a school that has no entrance requirements, where you could just go and work in a studio and all the teachers are artists who look at your work and advise you, but you mainly work on your own.  They had classes all day and evenings.  Well, that seemed kind of sketchy, but my life was kind of sketchy at the moment so I looked into it.
It was The Art Students League of New York.
I gave them a call and the lady on the phone said, “Just come on in, you can sign up and start today.” Wow. That seemed too easy, but I went to check it out.
215 West Fifty-Seventh Street between Broadway and Seventh Avenue. 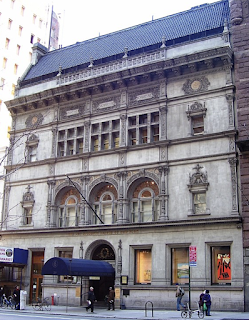 I walked in that beautiful door 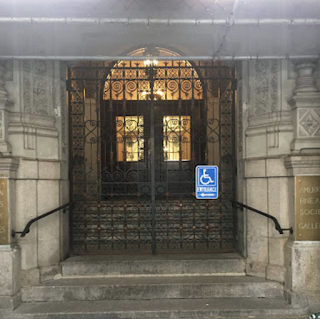 and was hit with the smell of art--oil paint and turpentine.  It’s still perfume to me.
At the office, I was handed a catalog and told, “Just walk around, visit all the studios, talk to the monitors, make yourself at home.”  The monitor is the teacher’s assistant who runs the class, sets up the model’s pose or the still life, arranges the easels, answers questions, and settles disputes.
I walked through the lobby with its bronze statue of Mercury, the messenger of the gods. 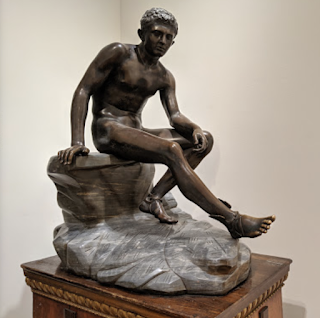 His toes and the wings on his heels were shiny as if they’d been rubbed for luck by generations of art students.
I felt like an intruder in the studios but people were working so intently they didn’t notice me. I found a class where everyone was drawing from the model on huge pads, using their whole arms to make their marks. This was so different from the tiny detailed drawings I had been doing that I thought it would be good for me.  It was April 22nd, 1970, the very first Earth Day.
I joined that class with my pad and my charcoal and got to work. Here I learned the etiquette of the studio.  The model undresses in private and puts on a robe.  She doesn’t remove the robe until she’s on the stand, and only the monitor speaks to her.   She is treated with dignity and respect.
I got a good lesson here in not being the only person in the world.  It was winter and I complained to the monitor that the studio felt overheated.  He pointed out that I was wearing corduroy pants, a sweater, a turtleneck, and boots while the model was wearing nothing.  Um--never mind.
My first teacher, Marshall Glasier, with scraggly gray hair and beard, heavy black glasses and a big belly, went around the class looking at everyone’s work, making marks when he felt there was something worthwhile.  You knew you were doing pretty well when you could hold his attention, but he’d get so wrapped up in your work that he’d forget where he was and he’d take over your drawing so that it would become a Marshall Glasier drawing.  That was OK; it was just newsprint and we were doing hundreds of drawings every day. Once in looking at my work, he said, “You’ve got an eye like an eagle.” That sent me floating on air for weeks--floating and working.  I spent hours at the easel trying to make my hand do what my eye and my brain told it to.  Of course, it was hard work but it didn’t feel like work at all.  I’ve looked up my records at the League and I put in over 5,000 hours at work there. That time flew by.
The League became my home, as it has been for generations of artists. Here's a partial list; Thomas Hart Benton, Alexander Calder, Helen Frankenthaler, Georgia O'Keeffe, Barnet Newman, Norman Rockwell, Winslow Homer, Man Ray, Jackson Pollack, Lee Krasner, Robert Rauschenberg, James Rosenquist, Louise Nevelson, Reginald Marsh, Romare Beardon Man Ray, Jackson Pollock, Lee Krasner,  Red Grooms, Donald Judd, Roy Lichtenstein, Mark Rothko, Ben Shahn Cy Twombly, Ai Weiwei.
I made this collage of the League's beautiful facade, with some art in the windows.
Can you identify the work? 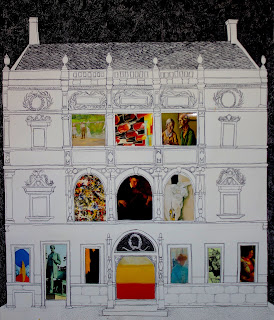