Or the Palace of ART.

Here's the story of a collage I had no intention of making.

Audrey Webber, Associate Pastor at First Presbyterian Church has come up with a terrific idea--Visual Art Bible Study.  Yesterday I was feeling oppressed by the number of meetings I've put on my calendar, wondering how to make more time for making art, but Audrey asked me to show up and so I did.

She showed us some work by Gerhard Richter, to whom I've never paid much attention.  This included a short video of him spreading paint on a big canvas with a squeegee. He also designed stained glass windows for a church in Germany, even though he declares himself an agnostic.

Then Audrey asked us to think about how we visualize God; that's an interesting discussion for one who thinks in pictures.  My first thought is always Michelangelo's image. Here's a version by a second-grader who said, "God is the only one who has clothes." 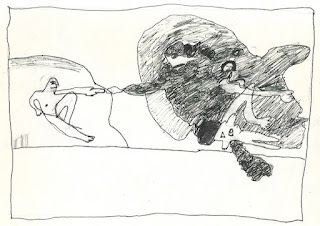 Then we read together a Bible verse, John 17:20.  John's gospel is different from the other three; I find more poetry there, less straight reporting.  Here Jesus is praying, telling God, His father how He's bringing God's word to the people. He says,

"Father, Just as you are in me and I am in you...I have given them the glory that you gave me, that they may be one as we are one, I in them and you in me."

And what dances into my mind?

I am the Egg man

They are the Egg men

I am the Walrus!

This is familiar; remember when I asked what's your favorite Beatle's song, that I could add to my Green House Drawing?  Cousin Dan said the Walrus, and so I drew two versions.  I just read that the whole song came about because at that time John had a droopy Walrus type mustache. 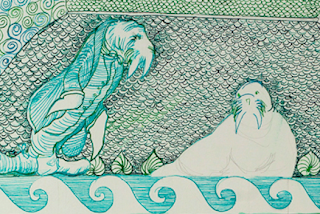 Then Audrey asked us to draw. Okay, I do that everyday.   But this time I took a fat marker and moved it over the paper in a much bigger, looser way than usual. 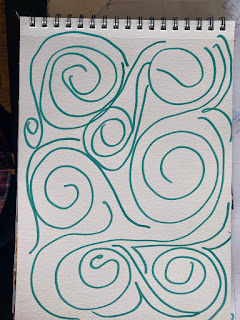 Then I thought about how nicely Audrey had presented the verses so I took a screen shot; 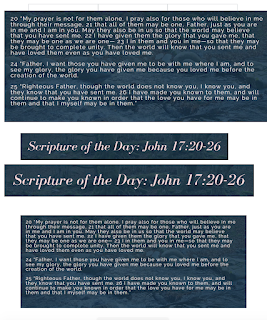 and printed it. Then I tore it up while the ink was still wet so the tear lines are nice and wavy. I moved the pieces around and then glued them down. 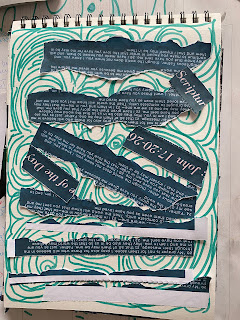 Then, since "I am the Walrus, I am the Egg man" kept running through my head, and because of all that

"I am in you and you are in me" I thought about the chicken and the egg so I tried adding an egg, 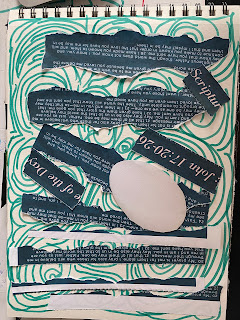 but I'm not sure it's necessary.

So that's it, a new page for my collage book!  thank you, Audrey, Bill and Irene for making Bible study so much fun.

Today we say farewell and Rest in Peace to Ronnie Spector of the Ronettes. I give thanks for her and all the wonderful girl groups--the Shirelles, Martha and the Vandellas, the Crystals, the Shangri-las, for accompanying my friends and me through our transistor radios as we walked to school many many years ago.

Oh, those songs!  Will you still Love Me Tomorrow?  Goin' to the Chapel, My Boyfriend's Back, And Then he Kissed Me, Mr. Postman, The Locomotion, the Mashed Potatoes, Be My Baby, Dancin' in the Street.

I can still sing every one of them; sometimes at the gym. Not out loud of course but I like to pretend I'm a backup singer in a rock and roll band.  It makes the miles on the stationary bike go much faster.

Look what I found in my research for today's post--The Beatles and the Ronettes in Concert! 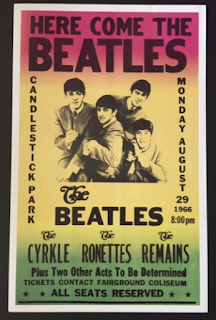 You know that great song by the Commodores called The Night Shift?  It's about Marvin Gaye and Jackie Wilson singing in Heaven. It always makes me cry.  Rock and roll in Heaven?  Bible study with the Beatles? It works for me.

A Reader Writes Back 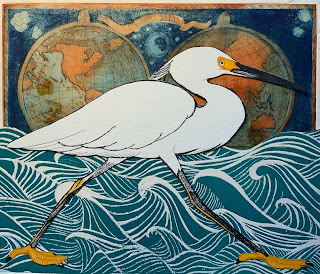 Remember how last week I said I'd make the great sacrifice of getting my orange juice from the grocery store in a cardboard container? Here's what my friend, Carol Skinger said. "Hi Barbara,   We solved the orange juice problem by stopping drinking it probably 30 years ago.  We just get oranges or clementines.  Don’t even bother to make juice out of them.  Green peppers and red peppers have the same amount of vitamin c as orange juice.  We decided OJ was just another sugary drink.  But when we were in Stowe a month ago our old neighbor Lyndall Heyer invited us for Breakfast.  Not only did she and Scott give us fresh squeezed OJ but they made us whole wheat sourdough waffles. They grind their own flour! On top was fresh fruits and homemade yogurt and Lew Coty’s Maple syrup!! OMG soooo good. And they set a beautiful breakfast table under a darling tree for shade and cooked the waffles outdoors as we drank coffee!  Now THAT OJ was worth it."  There's no comparison
Read more