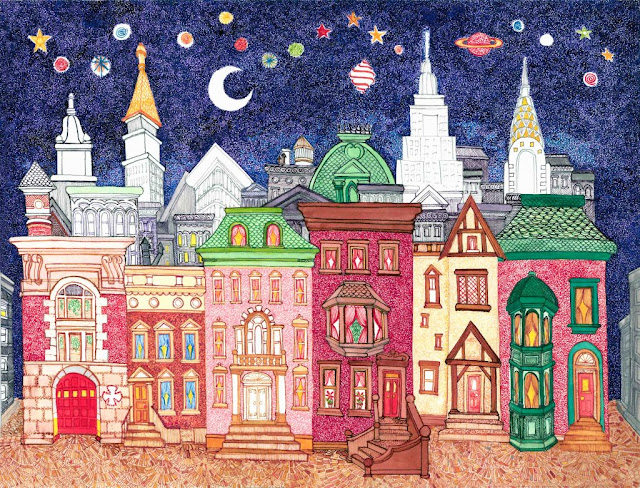 I love these quiet days between Christmas and New Year’s.  It’s a resting place to review the old year and get ready for the new; a time for reflection and remembrance.

I think of my grandfather, Robert Sinclair Swanson, who died on his sixty-eighth birthday, Christmas Day, 1958. I was ten, so I remember it all clearly.  We called him PopPop. He had had a heart attack years before and was forced to leave his business and “rest.”  Nowadays he’d be given a treadmill and a Fitbit and told to get moving.  The forced inactivity was hard on him and even harder on our grandmother.

But that Christmas Day all was well. The whole family met at Uncle Jack's. There were piles of presents; PopPop always insisted that he be given both a Christmas gift and a birthday gift, but since he was delighted with a ball of string or a new pencil his wishes didn’t strain our budgets. There was birthday cake and singing. He carved the turkey and after dinner plucked the carcass clean, ready for the soup pot, and made packets of white meat and dark for each family to take home for sandwiches.  When the day was over and we got in our car to leave, my mother said, “Oh, wait—I didn’t say good night to PopPop,” and she ran back for a quick hug and a thank you for the wonderful day.  When we got home the phone was ringing.  Mom picked it up and said, before even hanging up,“Bob, get back to Jack’s—your dad’s had a stroke.”

And that was that.  He had been sitting with my cousin John on his lap. He made a funny noise that my grandmother at first thought was to amuse John, then he put his head back and was gone.  It was sad for us and shocking but a perfect end to a life well-lived. 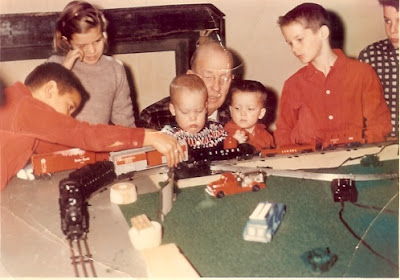 This is a picture from the day after Christmas the year before that one.  Santa had brought my brother Alan a set of trains and PopPop declared himself conductor in chief.  You can see he’s in his element with two little boys, my brother Robby and cousin Danny, on his lap and several big boys ready to do his bidding.  That’s me in the gray sweater, the boys are Alan’s friends.  Where’s Alan?  He’s upstairs asking Mom, “When is PopPop going home?”

I recently asked Alan what he remembers about that day.  He said, "PopPop was a very grandfatherly grandfather and he loved to do boy things.  It was great to watch how he did it all so carefully, putting the tracks together and connecting the engines to the cars. Then we'd start it up, and then we'd stop at the station..start and then stop. It was great.  But slow. Eventually you want... well...there are two engines and what if we make them crash?"

Mom was always thankful that she went back to say good-bye on that last night. I think she was also thankful that she never told PopPop about Alan's question.  She just told Alan to be patient. When I look at this picture I see a man having a wonderful time and I'm glad he had those moments.  I think Alan's glad, too.