Song of the Bronx 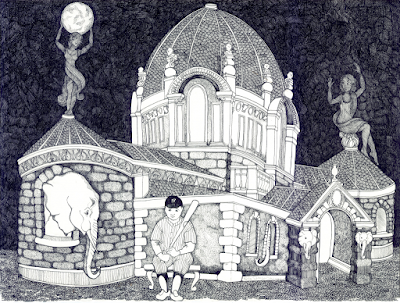 This is one of my favorite drawings because it covers many of my obsessions; architecture, in particular Beaux Arts, New York City, baseball, the Yankees,(that's Babe Ruth) animals, angels.  Well, those ladies cavorting on the roof don’t have wings, but they might be angels.  I put then there to fill an empty space then decided they were too prominent so I shaded them.  There are always decisions to be made and I never plan ahead beyond a vague pencil sketch.  I like to let a picture evolve; sometimes there are nice surprises and sometimes there are disasters.  I never know. Does my perspective look a little off?  My Dad once said to me, "I like how you get things a little wonky."

The Elephant House at the Bronx Zoo stands at the head of Astor Court, a series of Beaux-Arts pavilions surrounding the sea lion pool.  The red brick buildings are adorned with sculpture to tell who lives inside.  This was the original zoo, opened in 1906.  It was progressive for its time but they've learned a lot since then about caring for wild creatures and the big animals have since moved to more commodious quarters.

I’ve spent some of my happiest hours here, starting with my fifth birthday party. That was back in the day when you just threw a gang of kids in the car and took off. Mom stowed the cake in the bottom of Alan’s stroller.

The years passed and Arthur and I took our own kids to the zoo. We always went early, arriving as the gates opened. We liked it best in winter, especially when it was really nasty out and nobody else came. The animals seemed glad to see us.  Once a sandhill crane came right up to us and rubbed his head on the bars as if he wanted a scratch.  And as we entered the Sea Bird Aviary this little penguin spotted us from across the pool, dived in, swam to us and popped up as if to say Hello. It was a lovely welcome. That's my hand in the blue glove.  I was tempted to tuck him under my coat and take him home but I didn't. 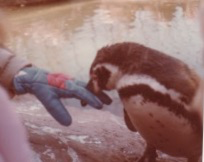 I was deep in my bird drawing period in those days and could have spent hours in the World of Birds but Sam, age three, walked out  saying, 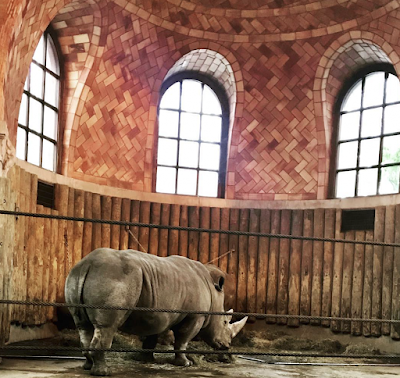 Now my kids take their kids to the zoo and the Elephant House is the Zoo Center but sometimes you'll find an animal there-like this White Rhino. Jessie took this shot and sent it to me--she knows about me and rhinos. 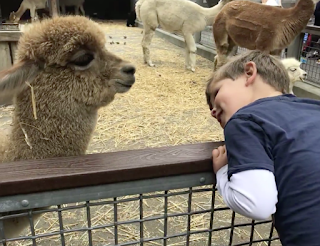 Here's Teddy making friends with a baby Llama--is he an alpaca?

The zoo is now part of the Wildlife Conservation Society. —saving species all over the world.
Here is their mission statement:

MISSION: WCS saves wildlife and wild places worldwide through science, conservation action, education, and inspiring people to value nature. To achieve our mission, WCS, based at the Bronx Zoo, harnesses the power of its Global Conservation Program in nearly 60 nations and in all the world’s oceans and its five wildlife parks in New York City, visited by 4 million people annually. WCS combines its expertise in the field, zoos, and aquarium to achieve its conservation mission. Visit: newsroom.wcs.org. Follow: @WCSNewsroom. For more information: +1 (347) 840-1242.

It's a wonderful place that's brought me enormous happiness and  inspiration.