Here is a painting that has fascinated me for years.


Young Virgin Spanking the Infant Jesus In Front of 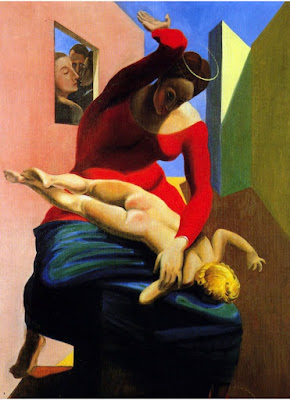 I first saw this at the Museum of Modern Art—I think it was a show about surrealism but I can’t find it on MOMA’s website.  It’s a shocking painting, almost six feet tall as I remember it.  Mary is sitting in a shadowy corner of a de Chirico like space before a bright blue sky,  spanking the heck out of the toddler Jesus—so hard his little bottom is bright red and his halo has fallen to the ground.  It’s a violent image—all sharp angles and brilliant colors.  She wears a  red dress and her lap is covered with a blue robe. Her arm is high over her head—she’s really letting him have it. And she’s doing it in front of witnesses; there’s a window through which Ernst and his friends, Paul Elard and Andre Breton are watching. Why are they there? Their presence is creepy and voyeuristic.

It knocked me out and raised a ton of questions.   At first I thought it might be a response to Ernst’s grand tour of Europe’s great museums and cathedrals and a glut of simpering Madonnas.

John Russell said Ernst’s anger dates back to the death of his sister, Maria.  Ernst blamed his father, the Catholic Church and God.

I didn't think much about Mary as I grew up; my grandmother never mentioned her. I think she didn’t want to tell me what a virgin was.  I can hear the conversation,
“What’s a virgin?”
“Well, she wasn’t married. “
“Then how could she have a baby?”
“Well, her husband didn’t know her.”
“How could they get married if he didn’t know her?”

MomMom was relieved to keep Mary in the background. Ernst made Mary the center of our attention.

Now that I know what a virgin is and how babies are made, I’m taking a closer look at Mary. So much of what I feel about her comes from the way artists, mostly men, have depicted her. Let's begin with the Annunciation, where the Angel Gabriel tells Mary that she'll get pregnant and give birth to the son of God. 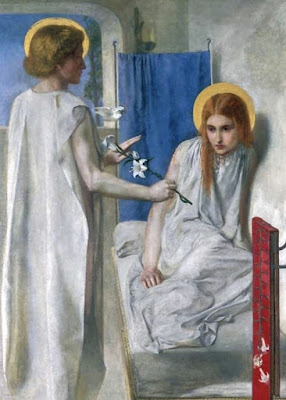 Dante Gabriel Rossetti made her look like a patient in an asylum. She can't get far enough away from him and his lily.  She seems to be saying “Whatever you have in mind, just forget it!” 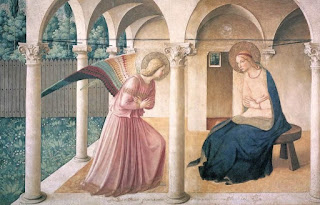 In Fra Angelico’s Annunciation the way she holds her stomach makes me think she’s about to be sick but then I see that her hands are mirroring Gabriel’s hands. And she says, “Oh, Ok.”

And then she sings the beautiful song that Bach wrote for her—The Magnificat; “My soul doth magnify the Lord.”

She’s all in. Traveling on a donkey in her ninth month?  That can’t have been fun. Giving birth in a stable?  Not something you want to try for yourself.

I remember the moment when I had had enough of natural childbirth and said, “OK, give me some drugs.” The cheerful little nurse said, “Nope, too late.”  I wanted to kill her, and the feeling that washed over me was sheer terror. It only lasted a moment but I haven’t forgotten it.  I had it easy compared to Mary but she gets through it and you don’t hear her complain. She gives birth to a beautiful baby boy. 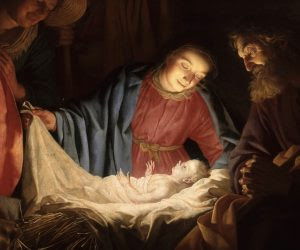 This is The Adoration of the Shepherds--I don't know the artist.

Look at her face- she really loves that baby.

She doesn’t get much time for bonding; pretty soon she’s got company.  She greets them graciously but in her place I might have said, “Thanks for the Frankincense and myrrh but what I could really use is some fresh swaddling clothes.  Maybe now you could all go away and let me sleep.”

Then she and Joseph have to get out of town because King Herod is looking for them. He wants to kill the baby.  Back on the donkey and more traveling.

Finally they get home to Nazareth and settle down to raise Jesus, the Son of God, God in human form, come to earth to rescue humans from their sin.   No pressure there.

As all human babies do, Jesus grew and developed a will of his own.  What did he do to set his mother off?  How long did she stay calm, answering his questions, persuading him to eat his supper and go to bed, before she finally lost it?

I once heard a child welfare advocate activist say,
“Anyone who says, ‘How could you hit a child?’  has never spent a day with a two-year-old.”
One of my church friends, at her wits end with her toddler, said, “Was Jesus ever a two-year-old?”  I wanted to show her this painting.  See?  Yes, Jesus was a two-year-old and even Mary could be driven crazy by a two-year-old's willfulness.

What did Max Ernst have in mind when he made this extraordinarily vivid painting? What did putting such anger on the canvas make him feel? Was it cathartic?  I have no idea. Do I care what he intended?  Not really.  He painted it, framed it and hung it up for all to see. That's the deal when you make art; you send it out into the world and let it inspire whatever it may.

I only know what it says to me.  It says Jesus was fully human, experiencing everything it means to be human, including a spanking. That’s my take.
Once again, art and faith have converged to show me something new and wonderful.  This irreverent painting has deepened my reverence for the heroism and humanity of Mary, the Mother of God.