I Love My Neighborhood 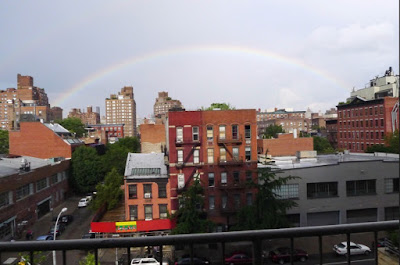 I love my neighborhood, the Far West Village. In our early days here a visitor said, “Wow, you live in the Boonies.”

We moved into our home in 1981. It was only two blocks from where we had lived but Washington Street was a line of demarcation between the brownstones of the Greenwich Village Historic District and the factories and garages of our new block. It was remote and industrial but the building had an elevator and we were expecting our second child—who turned out to be Sam.  I’d had it with lugging toddler Jessie, the stroller, and the groceries to our third-floor walk-up.  In those days, Skippy peanut butter came in glass jars, and I was mortified that Jessie repeated what I said when I dropped an extra large jar and it smashed.

Our new block stood between two elevated roadways. To get to our place you walked under the  viaduct line of the NY Central Railroad, dodging what the pigeons roosting there dropped on the street. It was now disused but left alone because no-one knew what to do with it. It was right below our windows. t looked like a wild garden.

To the west, we were only steps away from the beautiful Hudson River but the remains of the Westside Elevated Highway, shut down in 1973 due to lack of maintenance, stood in the way.
A great debate was raging as to what should replace it but in the meantime it moldered, rusting and crumbling, looking like a sleeping dragon. We never went near it.

Next door to us was the Superior Ink Company where the inks I used in my etchings were made.  Some neighbors didn’t like to smell the ink cooking but it was the aroma of art to me.  Across the street was a smokehouse whose smell I didn’t love; it was definitely not like bacon sizzling in the kitchen.

Directly across the street from us stood what was once a Police stable, then the studio and home of artist Lowell Nesbitt, of the massive flower paintings.  When our building became residential and he feared for his privacy he installed in all his windows large stained glass versions of his paintings—on the second floor vegetables, on the third floor, flowers.

When he turned on all the lights It was beautiful. 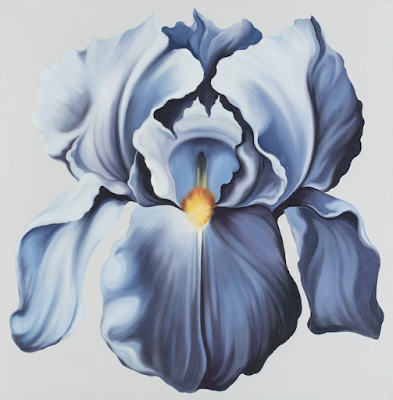 Lowell celebrated the cocktail hour every evening by inviting the young men who hung around the neighborhood to pose for him.  The entrance to his home was the ramp for the horses, and all the walls were covered with huge drawings of comely, naked young men.

Next door to Lowell was a garage filled with busses and a big sign that said,  “Learn to Drive a School Bus.”  Next door to the garage was a bar.

The meatpacking district was only a few blocks to the north; I mean the real Meatpacking District with real meatpacking and a lively, maybe even decadent nightlife. Remember where Glenn Close lived in Fatal Attraction?  That was our neighborhood.

In 1989 the remains of the Westside Highway were removed and we could see the river and New Jersey beyond.  We heard rumors about what would come next but not much happened—debate still raged.  We’d take walks there but it was still urban and gritty.

in 1991 the railway spur from Bethune Street To Gansevoort that went by our windows came down and real estate developers came sniffing around. The two now empty corner lots at Washington and West 12th quickly because construction sites. The plan for the building right next to us, 756 Washington Street, included a brick wall just twenty feet from our window but our neighbors got together and persuaded the builders to move to a different corner of the lot.  Phew.

Lowell Nesbitt moved away and Diane von Furstenburg took over his stable and the smokehouse.   After a few years she sold to a developer and in a twinkling everything-the smokehouse, the stable, the garage, Superior Ink, the bar on the corner—it all came down.  Now we had four construction sites on our block, all at the same time and another visitor said, “You live on the block from Hell.”
Well, not quite. I once overheard a young woman describe an ordeal she had live through,
“it was a living Hell but it could have been worse.”  It wasn’t pleasant but it wasn’t Hell.

Now, I have to say, our block is quite posh. There are two elegant apartment houses across the street.  The doorman at number 385 has the keys to our building and helps out if we forget ours and our doorman’s on a break.  He also keeps extra poop bags just in case.

The site of the little bar on the corner is still an empty lot, with grass growing.  I look there for dandelions.

756 Washington Street, which had threatened us with a brick wall has an open court yard planted with birch trees, a lovely little Japanese maple, and a pergola entwined with wisteria.

The Superior Ink site is a 17 story condo named the Superior Building; the doormen wear white gloves and always give us a friendly greeting as we walk by.  And we do walk by, because Hudson River Park has bloomed right under our noses.  Arthur and I walk there almost every evening. 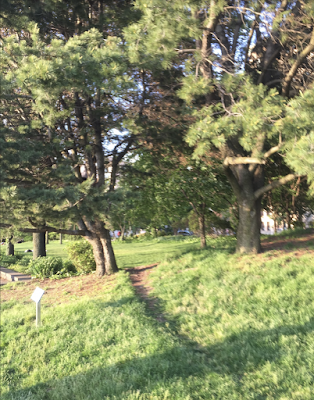 Diane von Furstenberg left the block but she remained in the neighborhood and worked tirelessly to transform the old rail line into the High Line, an elevated park now a destination for visitors from all over the world; at least once a week someone with exotic accents asks me how to get there.

My sister-in-law said recently, “This place was pretty scary when you moved in.” Nice of her not to say it back then.  Did we feel scared? Did we feel like pioneers? We were just happy to find a place we could afford with an elevator. Did we know such dramatic changes were coming? We had no idea.
In Vermont they say, if you don’t like the weather wait a minute and it’ll change.  We waited 38 years.  We liked it then and we like it now. 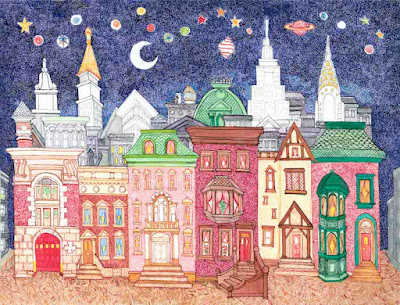