Today would be my father’s birthday.  I think about him all the time but today I’ll share him with you. 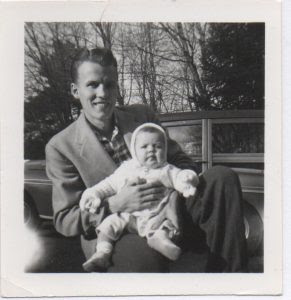 He and I go back a long way together.

Dad made friends easily--wherever he went he soon became a regular. It only took two visits to a new coffee shop before the waitresses greeted him by name and had coffee waiting at his table.

The managers of the Quick Mart where he bought his morning paper invited him to a baby shower for their daughter. Many people would make excuses and most men would hand the gift buying over to the wife, but not Dad. On his own he went to a baby shop and bought two little blue outfits--he knew she was having a boy--and had them nicely wrapped with a blue ribbon. Then he went to a Christian bookstore for a card.

“I want a card that’s Christian but not too Christian,” he told the clerk.

Dad said, “I’m a Christian. The person I’m sending this to is not. I want to let her know who I am without making her think I’m telling her who she should be.”

And the clerk said, “I think I can help you with that.”

He served in World War II as an infantry scout. He came home, met and married Ginny Brown, Mom, that is, and went to Babson College on the GI Bill. Then he joined the family business.  He started by sweeping the floors and eventually worked every job in the entire bakery, getting to know all the foremen and workers. They all called him Bobby.  He would work a shift then go home, shower, put on a suit and go back to sit in his father’s office and learn the business side.  I’m not sure when he slept. 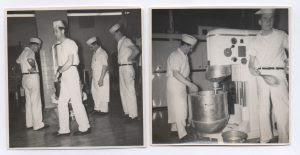 Here he is hard at work; in both shots he’s on the far right. What are they making?  Thomas’ English Muffins.

He worked hard and enjoyed the fruits of his labor.  He loved buying things and firmly believed that if you saved up for something you wanted your satisfaction would be doubled.

He loved money; not just having and spending but saving it. He collected owl figures because he like to say he was a wise old owl but I think of him as a squirrel, storing away acorns, rather, money, for a rainy day. 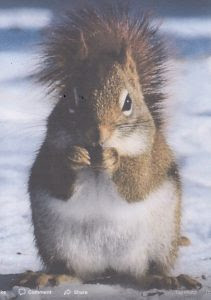 He kept his change in a jar on his dresser, and when that was full he’d sort it—pennies, nickels, dimes and quarters, then  roll them up in those little paper things and trade them in for five dollar bills.

I once said, “Here, Dad, I’ve got three fives for your collection,” thinking I would make it a gift, but he handed me a twenty in exchange.

“I’m not sure this is a sound banking practice,”  I said. But that was his way. He wasn’t a miser; he’d put those bills into envelopes with our names written on them and pass them out at Christmas time.  He loved giving presents and he always shared.  He told me when he got his first paycheck in the army he divided it by five and sent a share to each of his brothers and his sister. 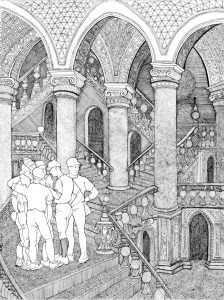 He loved baseball.  He was a star pitcher for his high school and the Little League team he coached won five League Championships in seven years.

After he died Mom got a phone call from an army buddy who’d read the obit in the Tenth Mountain Division Newsletter.  He said, “Boy, when I see him Heaven I’m gonna give that son of-a-gun what for.  I always thought I’d see him again.  You know, Ginny, for all his fooling around, we all trusted him, and we were happy to follow him.  He was a leader.”

He was a great Dad.  He wasn’t perfect; as he said, there was only one perfect man, but he took the many gifts he was given in life, put them to good use, and shared everything abundantly.