looking back and Walking forward

I said last week that I'd share with you another of our grandfather's great works.  Here it is. 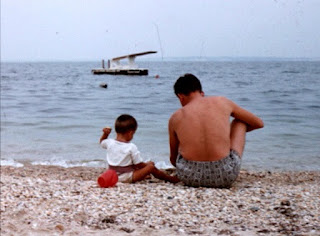 There it is in the background, with my Dad and little brother Robby, throwing stones in the bay. 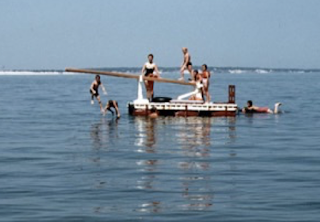 .
It was a wooden platform with a ladder and diving board that sat upon empty oil barrels. Here we all are enjoying it on a beautiful calm day on Peconic Bay. It sat high above the water so you could swim under the barrels and come up beneath it, where everything had a green hue from the reflection of the water, and your voice echoed off the empty barrels.  It was a magical place.

Unfortunately, it was quite top-heavy so it could turn over with too many people on it, but that was exciting, too.

Launching the float every spring was a huge job.  Here's how Uncle Dan describes Float Day.

"The Float was kept on the beach without barrels during the winter. The putting in the water days and the taking it out of the water days were traumatic. Davy was the biggest and strongest, so he did the heavy work. Each barrel had a metal band that had to be fitted around the barrel, lifted up together so it could be bolted to a bar on [the bottom of] the float. This required jacks, and much shouting and unnecessary directions. Also, it behooved the crew to attach the barrel while the float was in the water so that we didn’t have to drag it later on the sand.  As Bobby, Davy, and Jackie matured and moved on in their lives, Dad and I would do it together; that is he would give directions and I’d do the work.”

Those were happy days.  I"ll always be grateful for the memories.

These days are very different but Arthur and I are getting outside as much as possible, keeping a safe distance but smiling at our neighbors.

Here's what I've seen on my walks. 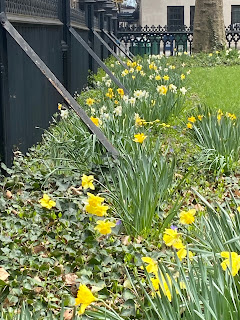 The garden at First Presbyterian Church, Fifth Avenue and 12th Street.  I'm pretty sure those are the daffodils Don Kilpatrick planted years ago.

In Washington Square, in the shadow of the arch, someone has drawn footprints within a circle with a radius of 6 feet, to make it graphic how much space we need to keep between us. 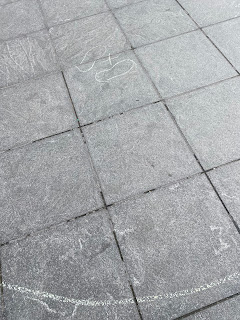 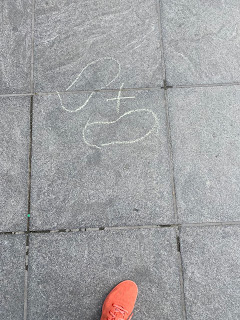 I hope you can see this--and take a hint. 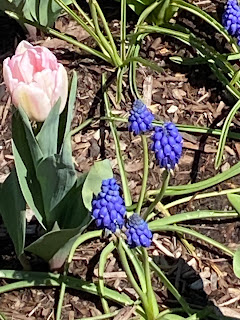 Bluebells and tulips in Sheridan Square, Stonewall Park.  The bees were busy at work here. 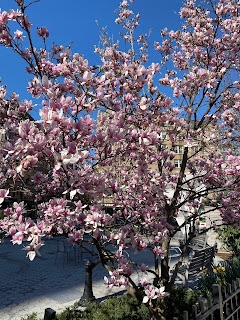 The magnolia I posted last week is now in full bloom. 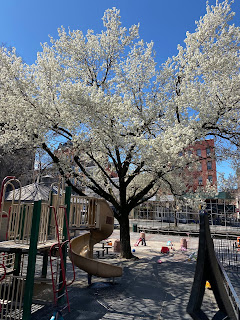 A flowering Pear in the local playground. 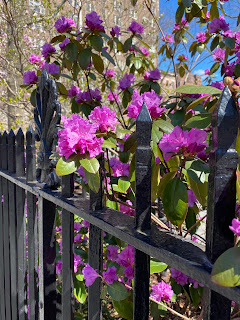 Rhododendron in Abingdon Square.  The tulip leaves are up and so the tulips should be appearing soon. 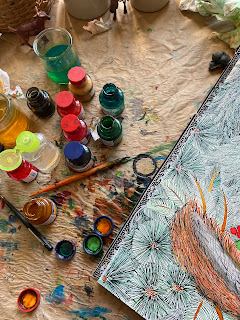 Here's my drawing table. I've started a new project, to be revealed next Christmas.
I hope that you are finding ways to keep productive and connected as we all practice safety.

As we walk in our beautiful Hudson River Park, which was just being created in September of 2001 I'm reminded of a letter posted by Captain James J Gormley of the New York Fire Department on September 15th of that year. He was holding out hope for survivors.
He said,
"Pray.  Do not underestimate the power of prayer. Hope remains.  Make your hope contagious. Inspire courage in one another.  Be polite to each other, it makes life easier.  If you despair, act courageously. If you are scared, stand up straight and march forward. Allow yourself rest. Maintain your health, we have lots of work to do."
He also says, "Embrace the path God puts you on.  Again, I ask you to pray, because Hope remains." 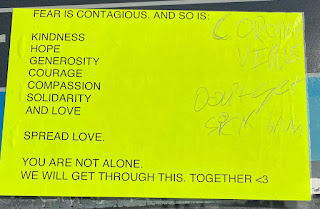 I'm aware that as I speak of being productive and connected, cozy in my home, and walking for exercise, there are people, in particular, health care workers, but also, grocery store clerks, the sanitation workers, delivery workers, the Police, the postal workers who carry on in the face of real danger.
Let's all thank them and keep them in our prayers.