Today, March 13, would be my grandmother's birthday.  Last year I posted this story about the day she died and I'm reprising it now.

My grandmother, Louise Mayhew Russell Swanson, we called her MomMom, died at home early in the morning on my daughter Jessie’s 7th birthday.  We were there, and after several hours of phone calls and business, after the doctor and the undertaker had left, I looked at Jessie and thought, this little girl needs a celebration.

So I drove to town to buy a cake, then went to the party store and bought 7 pink balloons and one purple to grow on. I headed out the door. The spiky chandelier in the entryway caught a balloon and POP!
I went back, they replaced it for free and I headed out again, this time holding my bouquet very low. On the street, I passed a woman with a lit cigarette and POP!
I went back to the store and this time I paid for the replacement. I headed out again, holding the balloons in a tight cluster. As they rubbed against each other, they heated up, the air and helium inside expanded just like we learned in fourth-grade science class and POP!
I went back.  They were not happy to see me. I asked the helium person not to fill them quite so full and she looked at me like I was speaking a strange language. I finally got the balloons to the car and put them in the back seat.

They rose up and completely filled the back window, blocking my view. I backed out of the angle parking space VERY cautiously and ever so gently tapped an on-coming car.
A crabby old man got out to inspect his fender and then drove off ignoring my profuse apologies. I wanted to say to him, “Sir, if you only know the day I’m having...” I guess you can’t expect kindness from someone you’ve just dinged.
I drove home carefully and we had a party in the midst of planning a funeral.

MomMom loved the Bible and Jesus, and she held an unshakable faith in the resurrection. In her circle Death was referred to as “Going Home.”
Sojourner Truth said at the end of her life; “I’m not dying--I’m going home like a shooting star!”

While planning this post I looked online for stock pictures of pink balloons.  Nothing really pleased me, so I said to my teacher and helper, Izzy,
"Lets' go get our own balloons."
So we did, and decided that instead of getting a series of POPS!!  I would give them away. Here's what happened.

I said to the man holding the door at Starbuck's,
"I don't have any cash, but would you like a balloon?" 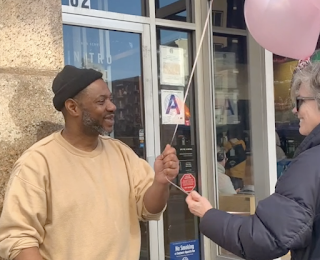 He took the balloon with a smile, saying, "You gotta be grateful for what you get, right?"
I'll go back and find him when I have money in my pocket. 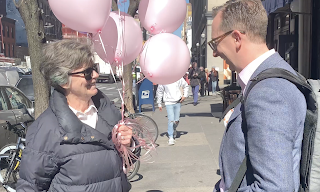 Then, who should I meet on Sixth Avenue but Michael Shake, Organist and Director of Music at the First Presbyterian Church in the City of New York, sporting a lovely pink shirt?

He took a balloon and went on his way.

Arthur's response to this video was,
"Barbara, I think it's time for you to consider rehab."
Izzy's response to Arthur?
"That means we're on the right track." 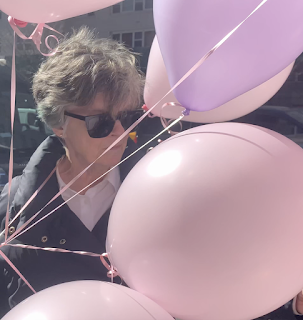 As things--places and events and gatherings we took for granted are shutting down here in response to the Corona Virus, let's be grateful for the things that connect us.
Keep washing your hands, and keep in touch.
at March 12, 2020