Trying to Work in the New World

I've started work on a new project but I've made a few false starts.  Maybe you'd enjoy a peek at the process.  It's not exactly sausage making but it's not pretty.
As a follow up to my book of Christmas Carols I'm illustrating just one carol--People Look East.  this is the one that inspired the whole project but it's copyright protected so I didn't include it.  For forty bucks I was entitled to make 200 copies to share with friends. that was too much of a limit on the book.  --so I'll just make it into a Christmas card.

So here's how I started.
Verse two says
"Birds tho you long have ceased to build,
Guard the nest that must be filled." 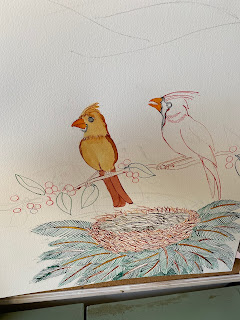 I like the birds but not the composition; everything's squished into the lower right corner.
A teacher once told me, "IF you make a mistake, don't erase it, let it show you where you want to go."  However, there's no fixing this composition. 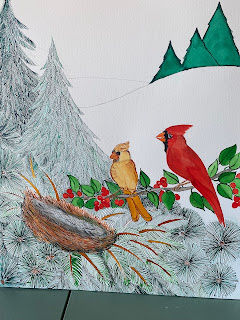 Better, and I like the projection of 1, 2, 3--one nest, two birds, three trees.  I didn't plan that, it just happened. A happy accident. Mrs. Cardinal's eye is a little sloppy but I can fix that with either white ink or photoshop. 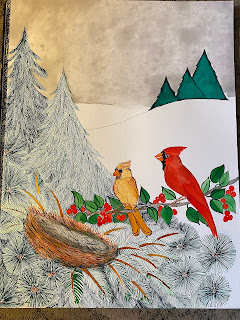 Then I made the sky gray for some contrast.  I thought about putting in white dots for snow but I haven't decided.

Onward to verse 3;
"Furrows be glad tho Earth is bare
one more seed is planted there
give up your strength the seed to nourish
that in time the flower may flourish"

I imagined an underground scene with seed in a starring role, 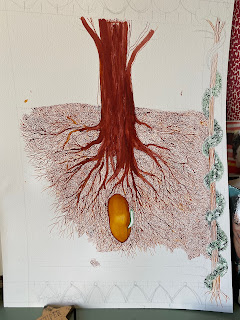 but the tree took over and looks much too solid--the roots should start branching closer to the surface. 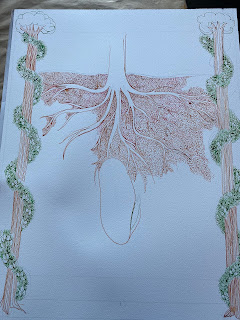 Then I thought of the stage etchings I made a long time ago and used in collages.  An old friend, the wonderful painter, Francis Cunningham, said, "When you're having trouble, feeling uninspired, go back to something you felt comfortable with."
So I made a new stage. I'll float the seed right in the middle. It'll be surrealistic.  Great! 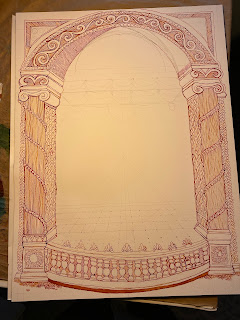 I worked like a demon on Tuesday and had a great time. 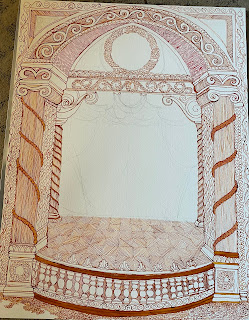 Now the work is going more slowly because I like it too much and I'm afraid of doing it harm. I heard that the secret of getting great art from children is knowing when to take it away from them and it may be true for me, too. But this is not finished.

So that's how I do it.  I hope that's not too much information.  I'll keep at it and let you know how it goes.


New Subject;
I have been posting on Instagram an image of PINK every day in March, partly in honor of International Women's month, partly inspired by my friend, Eileen Hoffman.  Here she is with her project for Art in Odd Places, 2019. 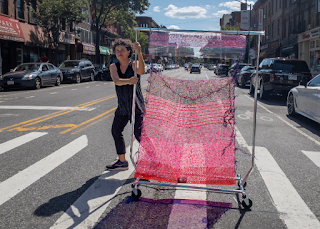 You can read what she says about pink and see her amazing work at Eileen Hoffman.


I'm also inspired by this quote from Audrey Hepburn which I found printed on a make-up case in the gift shop of the Museum of Folk Art. 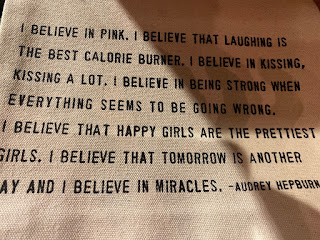 Here she is in a sidewalk stencil on Washington Street, right where I get my morning coffee. 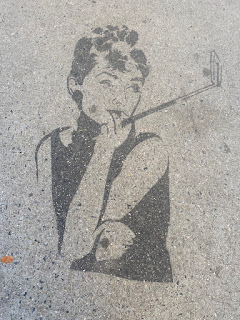 Thank you, Eileen, Thank you, Audrey.
Dear Friends, I hope you're staying safe, taking care and feeling in the Pink. 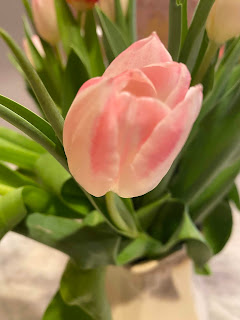