You are all so smart, and kudos to your Civics teachers!  Yes, this is the Preamble to the Constitution of the United States, rendered in license plates on display at the Smithsonian Institute.
Conceptual artist Mike Wilkins created this in 1987 as a celebration of the bicentennial of the Constitution. 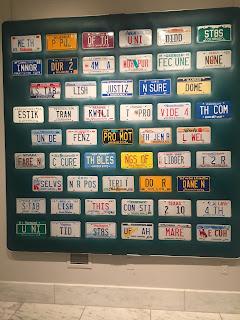 The Smithsonian posted this Background Information for Teachers
Preamble is an artful arrangement of personalized “vanity” license plates from all 50 states and the District of Columbia. The plates are organized alphabetically by state, beginning with Alabama and ending with Wyoming, and all contain shorthand text phrases. Read collectively, starting at the top left corner, a pattern emerges: artist Mike Wilkins has utilized 51 license plates to phonetically render the 52 words of the preamble to the U.S. Constitution. The words of the preamble are some of the most important in our nation’s founding documents, helping us to understand the purpose of our federal government and our relationship to it.
Looking closely at the license plates in Preamble, the names, colors, mottos, and even vignettes depicted upon them highlight the individuality of each state. Their differences lend a unique flavor created by history and the environment. The similarities among them— the standardized size, shape, and bolt pattern— hint at two intertwined concepts. First, and most practically, the license plates are mass­produced, mirroring the mass production of cars. Second, and more abstractly, these standardizations link to the federal system that keeps our states working together. State laws differ, but they function within the larger framework of the Constitution.
Wilkins created this artwork to commemorate the bicenten­nial of the United States Constitution in 1987, interpreting the relationship between the individual and the collective popula­tion embodied in the text of the preamble. The spirit of our nation’s motto, E pluribus unum (Out of many, one), is honored, the license plates reflecting the individuality of their state yet contributing to a cohesive whole United States. Speaking of the inspiration for Preamble, Wilkins explained: “I was trying
to think of some way to salute the 200th anniversary of the Constitution. It needed to be something that was all­inclusive but that kept the states separate and also knitted them together.”

This piece in the LA times tells of Wilkin's efforts with the states.  What's the only state to give him a hard time?  Read here,
https://www.latimes.com/archives/la-xpm-1987-08-26-ca-2727-story.html

Email ThisBlogThis!Share to TwitterShare to FacebookShare to Pinterest
Labels: Artwork