Sunday was the anniversary of the day Lucy came to live with us. 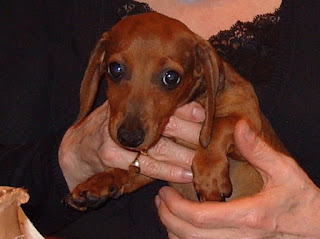 To celebrate I commissioned my friend, Ryan Bauer -Walsh, to paint her portrait dressed like a Jane Austen character.
Which character? Let's look at Pride and Prejudice.
She's beautiful and sweet-tempered, so, Jane, Mr. Bennett's eldest daughter.
She can be a bit wanton in her affections and her manners; when greeting an old friend she sometimes gets so excited she has to pee. We call it the Pee of Joy.  That would make her kind of a Lydia, the flighty youngest Bennett sister.
Out on the street, I'm afraid she has a bit of Lady Catherine de Bourgh in her treatment of big dogs and skateboarders; "By what right are you on this sidewalk?  How dare you, and be gone immediately."

But look at those fine eyes and what my friend, Bunny, calls her look of intellectual curiosity. Consider the discernment with which she regards the gentlemen dogs who approach her. She is definitely a Lizzie.
so here she is, Lucy Russell Sherman as Miss Elizabeth Bennett. 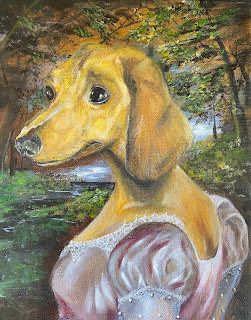 It's not the first time Lucy's been enshrined in art. 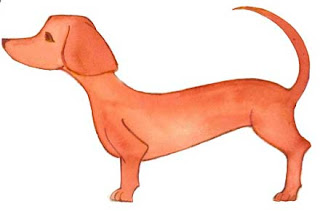 And here's Molly's portrait of Lucy. 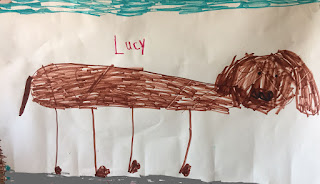 A great muse inspires many artists.

One of the first things I did when I moved into my own apartment in New York City was to get a dog,
a West Highland White Terrier named Maude. 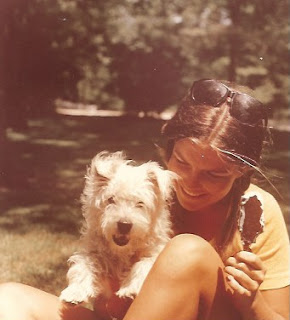 When I met Arthur I told him she was part of the deal.
At the age of two she came down with a mysterious and painful malady.  The vet told me they'd have to do tests, it might be rheumatoid arthritis, she would suffer, and I'd be facing the terrible decision that usually doesn't come until a dog is very old.
Arthur picked me up at the Animal Hospital and as I told him the story he was so unnerved by my sobs that he made an illegal left turn and got pulled over by a cop.  He stepped out of the car and explained what had made him so careless.  The officer looked in at me and said, "Is that right, Ma'am?"
I said, tearfully, "Yes, I don't know what's going to happen to her, I might have to put her down, she's in terrible pain..."
He said to Arthur, I don't know, sir...if it were a child I might...You'll have to tell it to the judge," and wrote him up.
So Arthur went to traffic court and told the whole story to the judge, who threw out the ticket.
"I know how it can be," he said,  "I know if it were my Archie..."  And Arthur walked.
I'm happy to say Maude recovered and lived another fourteen years. 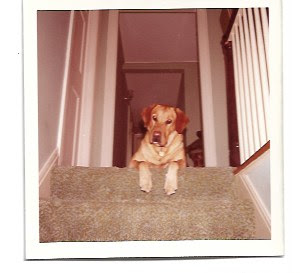 but my mother talked him out of it.  I hate to admit it, but she was right.  I had my hands full and a big dog might have done me in.
So we had two cats, and we loved them but after the kids left home for good I started to pine for a wagging tail. On a beautiful spring day I happened to run into the annual Dachshund Parade and came home full of yearning.
Arthur did the Dad thing about no, no, you won't take care of it, it's too much trouble but all the time he was plotting, looking online at portraits of puppies and on my birthday, Lucy flew in from Council Bluffs, Oklahoma.  Her kennel name was Stormy but we swiftly changed that and so here we are.
We love her to pieces.

I often think of our neighbor and friend, Doris and her little cairn terrier, Mitchell.  Doris was quite elderly but active and very alert and interested in everybody.  I often met her in our lobby and she'd ask me what I was up to, how are the kids, make a comment on what I was wearing, where I was going--she was all outward-facing, not at all self-centered. Mitchell was a big part of her routine and her social life--she met other dog lovers and invited them to her dinner parties.  We got to know many of our neighbors through her.
I'm sad to say that when Mitchell died Doris didn't really recover from his loss.  Six months later his dish still sat in her kitchen, she no longer went out for walks, and her memory began to fail.  It's hard to measure how important he was to her well-being.


Harry Truman said, "Children and dogs are as essential to the well-being of the nation as railroads and banks."  I say, Hear, Hear.