The Seneca Falls Convention of 1848

Last week we celebrated the one hundred and seventy-second anniversary of the Women's Rights Convention at Seneca Falls, New York.  Here they presented 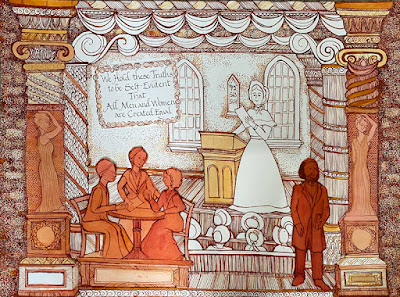 the Declaration of Sentiments and Resolutions, drafted by Elizabeth Cady Stanton, modeled after the Declaration of Independence, demanding, for women, equality with men before the law, in education, and employment. They wanted to add the vote, but many thought that was going too far.
Who was one of the only men at the convention?  Frederik Douglass.  That's him on the right, in the statue that stands outside the NewYork Historical Society here in NewYork City. The motto for the newspaper he published, The North Star, read,

“Right is of no sex   Truth is of no color

On the left, I have the first monument to real women to be placed in Central Park. It will be dedicated next month. That's Sojourner Truth sitting with Susan B. Anthony and Elizabeth Cady Stanton.  The original model had only Susan and Elizabeth and was derisively called the "White Ladies Monument. " So they added Sojourner Truth.

Did those three actually work together so collegially?

Everybody's talking about statues, and not just talking but tearing them down. Let's keep talking. I wrote about this on June 25. Here's a link,

What's the story behind our statues? Did you know that Gutsom Borglund, the designer of Mount Rushmore, was a Ku Klux Klan member? Does that change the way you feel about those guys on the mountain?

Why do we honor military leaders who took up arms against the United States? Aren't they traitors?

How about the Father of our Country and the writer of the Declaration of Independence?

Can we honor their achievements and despise their sins? Can we look at their statues and live with all the feelings they bring up, and then go to work for justice and equality?

Mark Harris did this illustration for an op-ed piece by Lucien Truscott, a descendent of Jefferson, who said we should take down the Jefferson monument and let Monticello be the place where we could see the man in full. 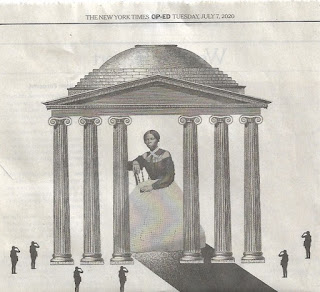 I like this image. As a fortune cookie told me years ago, "Art is the Answer."  Well, it's one answer.

Let's respond to all the questions raised by listening and thinking and learning.

Let's have a whole host of new monuments, and let's put Harriet Tubman on the twenty-dollar bill.

On the hymn board in my drawing, I listed three hymns.

92 in the Methodist hymnal; Amazing Grace, written by John Newton, a slave trader who became an abolitionist.

563 in the Presbyterian hymnal; Lift every Voice And Sing. It's called the Negro National Anthem, but notice it says lift every voice.

564  in the Presbyterian hymnal; America the Beautiful, for its aspirations.

I can't find the link but last year on July 4th I posted Ray Charles singing America the Beautiful, or as its author, Katherine Bates, called it, A the B.  Google it and give yourself a treat.