HAVE YOU VOTED YET? 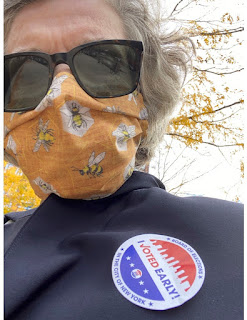 When I vote I think of this young man. 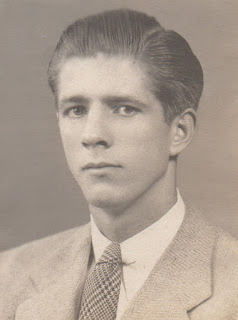 My uncle, Alan Woodhull Brown, Mom's big brother.  A student at the University of Pennsylvania, a sergeant in the United States Army. 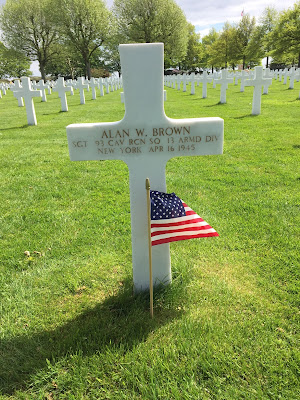 He died in Dellbruck, in the Rhineland region of Germany on April 16, 1945, only three weeks before the end of the war. He was twenty-one.
My grandfather was on the draft board of their town. What must it have cost him to put his boy's name on that list?  I'm pretty sure he never considered creating a deferment such as bone spurs to spare his son.
I never knew Alan but thanks to Mom's stories he was a presence in our lives.  At Dad's funeral, a family friend saw my brother, Rob, walking towards her and said,
"Oh, my, he walks just like Brownie,"  so now we know that Alan had a jaunty, long-legged strut and we can picture him more clearly.
When I vote I also think of John McCain, who was offered early release from prison in Viet Nam, but refused to leave his comrades and so endured five more years of torture.
Look behind Alan's cross to all those straight rows. So many people have made enormous sacrifices for our right to vote.
This not just a chore; it's a sacred duty.
at October 29, 2020