On January 8, still reeling from the news out of Washington in the 6th, I reached out to you for help; I needed ideas for inhabitants of my Red House Interior.

The Rhino, suggested by Ellen Grossman, was an immediate yes.  I can't go wrong with the Rhino and here he is. 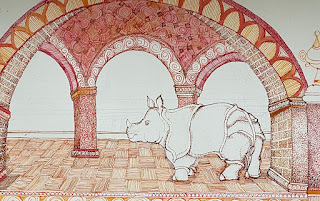 He still needs work, but I think I'll keep him white and build up his background.

My second respondent was my cousin Dan.  He suggested Jimi Hendrix's girlfriend--why?  Because of the song, Red House, and the lyric, "Yonder's the Red House...that's where my baby lives."

I downloaded Jimi's rendition of Red House and it's great. That reminded me of The Star Spangled Banner and the way Jimi played it at Woodstock. At the time there was outrage at his rendition--people thought he was an anarchist deliberately trashing our national anthem.  Actually that's not at all true. Jimi Hendrix served honorably in the United States Air Force and played the Star Spangled Banner in his own respectful way. Who owns the Star Spangled Banner?  Who gets to sing it? Who does it best? Robert Merrill at Yankee Stadium?  Whitney Houston at the Super Bowl?  Kate Smith?  Jose Feliciano?  Lady Gaga?

So here's Jimi Hendrix as he appeared at Woodstock. He's a work in progress; the jacket he wore at Woodstock had beautiful fringe on the sleeves that I still have to draw.

The largest space on the first floor took some thinking.  I decided agains the cow, the stork and the mermaids in favor of Her. 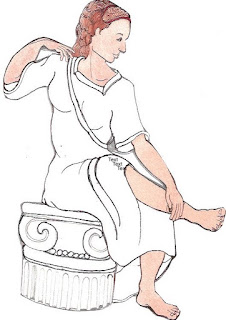 But she's looking at somebody, so I gave her two companions, cut out to match her. They're a little big for the space but I like playing with scale. 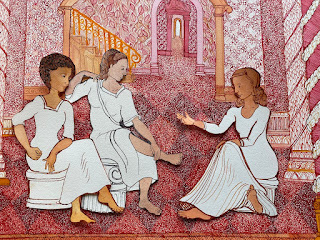 Who are they?  Maybe the three graces, the daughters of Zeus; Thalia, Euphrosyne and Aglaea, who embody Youth/Beauty, Mirth, and Style and preside over banquets and gathering to delight the guests of the gods. But I think these dames are up to more than just planning parties, not that I have anything against parties.

I can't resist adding here what William Golding had to say about Women. 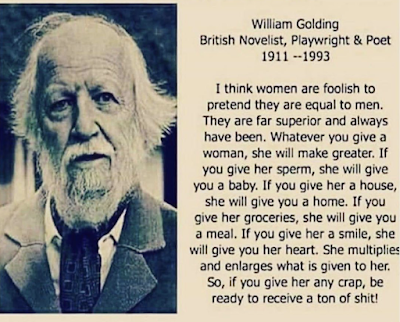 So with my Graces I'm paying tribute to women who take what they're given and make more of it; Ida B. Wells, Francis Perkins, Ruth Bader Ginsburg, Shirley Chisholm, Stacy Abrams, Kamala Harris, the list goes on and on.

When I think of the people who work to affect change for the common good I think of what my grandfather and then my father used to say when there was work to be done;

It means, pay attention, see what needs to be done and just do it. That remind me of this poem by Marge Piercy.

To be of use

The people I love the best

without dallying in the shallows

and swim off with sure strokes almost out of sight.

They seem to become natives of that element,

the black sleek heads of seals

I love people who harness themselves, an ox to a heavy cart,

who strain in the mud and the muck to move things forward,

who do what has to be done, again and again.

I want to be with people who submerge

in the task, who go into the fields to harvest

and work in a row and pass the bags along,

who are not parlor generals and field deserters

but move in a common rhythm

when the food must come in or the fire be put out.

The work of the world is common as mud.

Botched, it smears the hands, crumbles to dust.

But the thing worth doing well done

has a shape that satisfies, clean and evident.

Greek amphoras for wine or oil,

Hopi vases that held corn, are put in museums

but you know they were made to be used.

The pitcher cries for water to carry

and a person for work that is real. 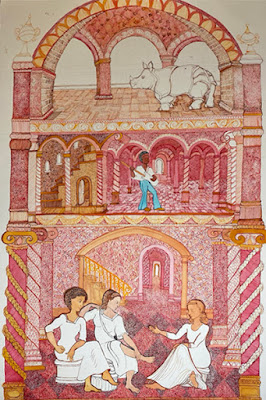 About a year ago I reposted the story of how my grandmother died on my daughter’s 7th birthday and how I had to find some joy in the midst... 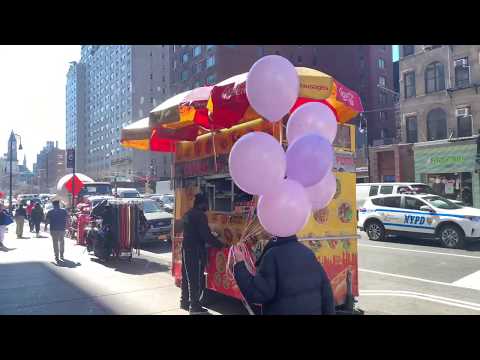