My work is currently in an online show titled Lost and Found on the New York Artists Circle website .

"The New York Artists Circle presents the unique visions of 117 selected Artists who explore and reveal what is truly important in our lives, as they cope with waves of serial losses and change during this Pandemic time.

Besides submitting artwork we had to write 40 words on the subject. Here's my piece and what I wrote. 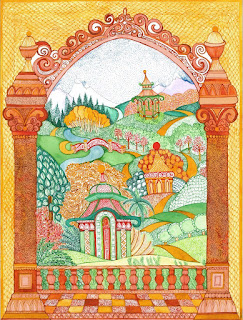 We’ve lost the freedom to just go.  To protect our health and that of our neighbors we’ve settled in, turned inward and explored ways to travel, connect and explore with our imaginations and the help of the internet.

I found a new music platform and tuned in to the Beatles station--I enjoyed a full day of Beatlemania--almost every song in no particular order.  Oh my goodness, what happiness; so much variety, so many different moods and they all made me feel great.  I danced while I drew and while I fixed dinner.

I was in the tenth grade when the Beatles arrived on our shores, March 1964.  We had lived through the assassination of President Kennedy the previous November; we needed a little joy and boy did they deliver.

I asked my brother Alan what was his favorite Beatles' song and he said, "Anything in "Revolver." Up 'til then I thought they were bubble gum and I preferred the Stones."

Excuse me?  I had no idea he was so discerning. He was twelve, so what did he know?  If the early Beatles were bubble gum it was the very highest quality bubble gum.

When our granddaughter, Molly, was in the first grade her class learned a Beatles song every week.  It seems the Beatles' vocabulary works very well with the early reading curriculum. That's a lot more fun than Dick and Jane. Molly's favorite was "Black Bird;" 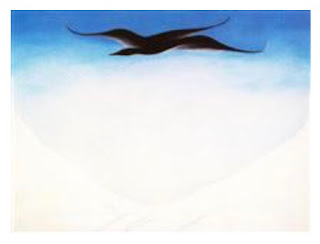 Black Bird Above Snow-Covered Red Hills
Georgia O'Keeffe
She would play it on repeat as she fell asleep at night. It's a lovely lullaby. If you google it you can learn what Paul was thinking as he wrote it. When she gets older I'll show her Wallace Stevens' "13 Ways to look at a Blackbird."

And then Ringo made an appearance on A Late Show to respond to Colbert's Questionert.

Steven Colbert said, "OK, you can hear only one song for the rest of your life-"

Ringo didn't think it over, he just said, "'Come Together!'"

"Come Together" is on "Abbey Road," the Beatles' last studio album. I've always loved this image and someday I'll put it in a drawing. Someday. 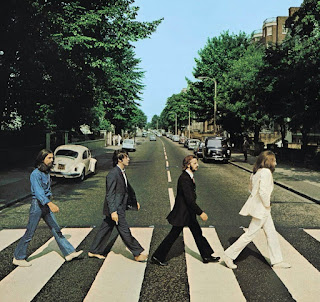 It was a time of turmoil for the Four, with artistic and financial disputes and Yoko Ono. As George put it, “Apple was getting like school, where we had to go and be businessmen: ‘sign this’ and ‘sign that'."
I can't speak for Ringo but I felt sad when he spoke of making "Come Together, "

"Because of the way it goes and because working on it--John was being John."  He said, "It's been forty years..."

My friend, Robin, said "Of all the assassinations we lived through, that one felt most like a violation." 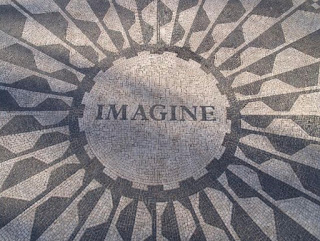 The day after we heard the news, "Imagine" came on the radio;  I started to weep and Jessie, age 17 months and just beginning to talk, toddled over to me and patted my shoulder saying "Awww." It was a sign that she was developing empathy, a tiny moment of joy.

This past Tuesday morning I called my brother, Rob, to share the news of the death of the great Lloyd Price, one of the godfathers of Rock and Roll, who sang what I consider the definitive version of Stagger Lee.  My dad taught me to do the Lindy to that song and Rob sang it as a lullaby to his three daughters, so this was a moment we needed to share.

Rob said, "I'm out looking for something to shoot." He has the perfect job for him; he drives around the Champlain Islands shooting scenes for the local paper, The Islander.

"I've got nothing," he said, "I feel like I've done everything at least a hundred times."

I said, "Well, you know, a cliche is an oft-told truth.  There's nothing new, you just have to find a new way to look.  So, what's your favorite Beatles song?"

"That's one of my favorites, too."

"Yeah you had the album [The White Album] and listening to it stretched my little mind.[Rob is 7 years younger than I] I had thought the Russians were terrible and here they were, glad to be back home, loving their home, just like me."

Back in the USSR is said to be a parody of Chuck Berry's "Livin' in the USA" and The Beach Boys' "California Girls;" I prefer to call it a tribute.

Then Rob said, "Oh, shit!  Hold still--hold still!"  and we hung up. He must have found something to shoot. 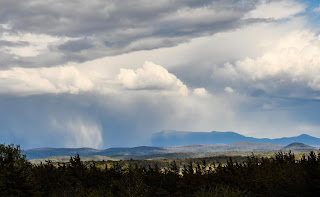 He took this yesterday; I'd love to believe he was telling the clouds to hold still.

I've had a great time this week roaming through Beatle land, asking people their favorite song. Everybody has one, even if they say they can't choose.  Each song brings up memories and places me where I was upon first hearing it.  Arthur loves, "Here Comes the Sun," which I've programed as my wake-up call.   Nancy says "So many great Beatles songs--hard to choose but 'Let it Be' is up there for me. "My friend Fran said she couldn't choose, then said, "Michelle,'' "Yesterday" and "Yellow Submarine." Since I'm working on an underwater scene, I'll add a yellow submarine. I've already done an Octopus's garden. 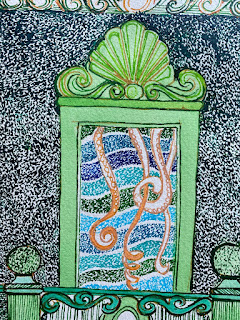 We were talking about Lost and Found, sorrow and joy.  Happy memories often come with sad ones. Have you ever laughed at a funeral, when the speaker tells a story and the dearly departed is suddenly with you? You then begin the process of incorporating the loss and your memories so that you can carry on.

My friend, novelist Alexandra Marshall, is writing about the losses she has suffered.  She said,

"Yes, loss accumulates. I think of loss as an aquifer running beneath us, each loss distinct but joined and amplified. In my one life of repeated loss, the only “help” is the ability to create, a gift for which I’m so thankful."

I look up the word aquifer to be sure of its meaning.  It's an underground layer of permeable rock containing water.  So, a solid foundation and a source of life sustaining water.

George  said about Here Comes the Sun, "Anyway, it seems as if winter in England goes on forever, so by the time spring comes you really deserve it."  That goes triple for this spring of 2021.

Tuesday after my talk with Rob as I walked across 14th Street a man came towards me, singing loudly.  I thought I heard the word "sun."  I thought if he were singing "Here Comes the Sun" that would be too perfect but he was singing "The Sun'll Come Out Tomorrow," which will do.

The world open is0pening up again and we're welcoming back the Pride Parade and the Evelyn Davidson Water Table at First Presbyterian C... 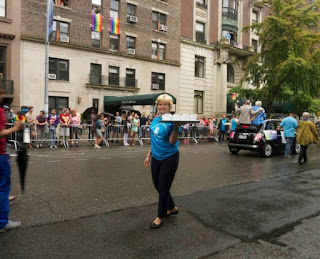