- December 09, 2021
Thank you to everyone who came to our Artists Talk on Art  presentation titled Lightning and Inspiration on Monday evening.  Eileen Hoffman and I talked about our work and what inspires us.
It is now posted on ATOA's YouTube account,
https://www.youtube.com/watch?v=SD7TMuE4-bY
I also introduced the Barbara's who responded to my Saint Barbara questionnaire and promised to show them and their work in fuller detail so...Here's the first Barbara of the Day, my neighbor and friend, Barbara Rachko, master pastellist, blogger at "Barbara Rachko's Colored Dust" and author of an ebook, "From Pilot to Painter." 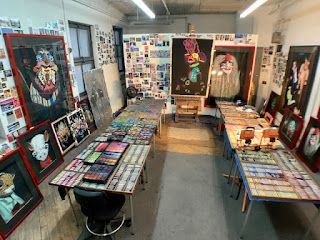 Barbara Rachko is an American contemporary artist and author who divides her time between residences in New York City and Alexandria, VA. She is best known for her pastel-on-sandpaper paintings, her eBook, “From Pilot to Painter,” and her popular blog, “Barbara Rachko’s Colored Dust,” which currently has 77,700 subscribers.  She is represented by Galleria Balmain (London), Emillions (US), Interstellar (New Delhi), and Galleri SoHo (Sweden).

Barbara has led an extraordinary, inspiring life.  She learned to fly at the age of 25 and became a licensed commercial pilot and Boeing-727 Flight Engineer before joining the Navy. As  a Naval Officer she spent many years working at the Pentagon and retired as a Commander.  On 9/11 her husband, Dr. Bryan C. Jack, was tragically killed on the highjacked plane that crashed into the Pentagon.

Barbara travels regularly to Mexico, Central America, South America, and Asia.  In her earlier pastel painting series, “Domestic Threats” and “Black Paintings,” she used her large collection of Mexican and Guatemalan folk art – masks, carved wooden animals, papier mâché figures, and toys – to create one-of-a-kind pastel-on-sandpaper paintings that combined reality and fantasy to depict personal narratives.  Since 2017 she has been creating a series called “Bolivianos,” based on an exhibition of Carnival masks she viewed in La Paz, Bolivia.

In 2017 Barbara’s long-standing fascination with traditional masks and indigenous cultures took a leap forward when she visited the National Museum of Ethnography and Folklore in La Paz.  One particular exhibition on view, with more than fifty festival masks, was spell-binding. The masks dated from the 1950s and 1960s and were crafted in Oruro, a former tin-mining center about 140 miles south of La Paz.  Depicting important figures from Bolivian folklore traditions, the masks were created for use in Carnival celebrations that happen each year in late February or early March.

The annual Carnival celebration in Bolivia is the second largest in the world (after Rio de Janeiro’s).  Carnival in Oruro revolves around three great dances. The dance of “The Incas” records the conquest and death of Atahualpa, the Inca emperor when the Spanish arrived in 1532. “The Morenada” dance was once assumed to represent black slaves who worked in the mines, but the truth is more complicated (and uncertain) since only mitayo Indians were permitted to do this work. The dance of “The Diablada” depicts Saint Michael fighting against Lucifer and the seven deadly sins. The latter were originally disguised in seven different masks derived from medieval Christian symbols and mostly devoid of pre-Columbian elements (except for totemic animals that became attached to Christianity after the Conquest). Typically, in these dances the cock represents Pride, the dog Envy, the pig Greed, the female devil Lust, etc.

The La Paz exhibition was stunning and dramatic. Each mask was meticulously installed against a dark black wall and strategically spotlighted so that it seemed alive. Barbara thought the whole effect was uncanny. The masks resembled 3D versions of her “Black Paintings,” a series she had been creating for ten years.  She knew immediately that this experience was a gift and spent time composing photographs to use as reference to make paintings when she returned to New York.  Consequently, Barbara has enough reference material to create new pastel paintings for years to come. The series, entitled “Bolivianos,” is arguably her strongest and most striking work to date.

Barbara is a master pastel artist who spends months, and hundreds of hours, to create each pastel painting.  Here is a description of her self-invented, labor-intensive pastel technique, which she has been refining for approximately 36 years.

To achieve the dark black backgrounds in her “Black Paintings” and “Bolivianos” series, she layers Rembrandt black soft pastel on top of each other.  The 400 or 500 grit acid-free sandpaper that serves as her painting support requires at least four layers of black pastel just to achieve even coverage.  Over the next few months she adds many more layers of black pastel to achieve the final rich look.  The figures and shapes in each pastel painting are a different  story.  Were you to x-ray them, you’d see many different colors underneath the final one.  With each additional pastel layer, she corrects, refines, and strengthens her drawing so the objects depicted become more solid and three-dimensional.

Barbara’s color sense is nuanced and highly developed.  In addition to the thousands of pastels she has to choose from - she works with most brands of soft pastel - Barbara layers, mixes, and blends new colors directly on the sandpaper.  With each additional pastel layer the colors become more rich and intense.  As she works, Barbara searches for the ‘best’ colors, those that make the developing pastel painting on her easel more resonant, alive, and exciting to look at.  She loves the challenge of continually improving her craft and demonstrating the limitless possibilities of pastel.  Barbara truly is “Revolutionizing Pastel as Fine Art!” 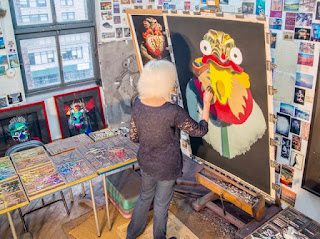 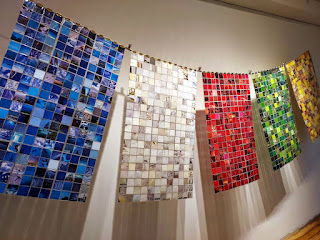 An extraordinary show and two important lessons for your own practice 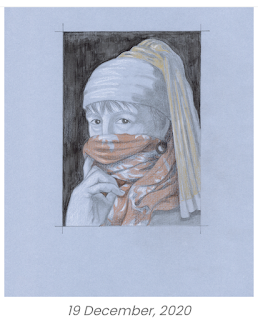 Save the date for the opening of Fran Beallor ’s extraordinary show titled  Self: 2020 Hindsight, 366 Portraits At El Barrio's Artspace PS 109 215 E. 99th Street N ew York, NY 10029 Opening reception Friday, September 9, 6-9  Exhibition dates: Wednesday, September 7 - Saturday, October 1, 2022  Show open daily: 10am - 7pm For the fourth time, Fran Beallor has set herself the challenge of making a self portrait every day for one year.  She even chose leap year to add an additional day.  Each image is 5x7 inches in pencil on a 9x12 inch toned paper. Fran has written a fascinating account of the project which you can read at  franbeallor.com but I want to tell you about  two elements that stand out for me, that have resonance for all artists, actually anyone who embarks on a creative project. First, discipline. Chuck Close said, "Amateurs wait for inspiration, the rest of us just show up and get to work…All the best ideas come out of the process; they come out of the work itsel
Read more 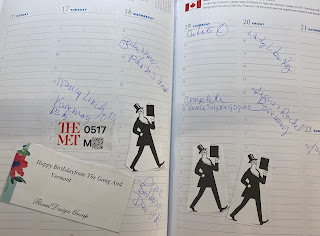 I've had to face a sad loss this week. You know that little envelope The New Yorker tucks into each issue so you can renew your subscription?  For years it's carried the image of Eustace Tilly, New Yorker's cover boy taking a walk with his nose in a book.  I always cut him out and paste him into my date book like this;      Suddenly they've changed it to something not nearly as engaging. I loved that little man and now he is no more.  It's the end of an era. Once again, I'm deeply saddened but I must move on.       On to more collages. I'm happy to say that Vogue, Ralph Lauren and the World Wildlife Fund gift catalogue have come through for me.        Look at my second-grader's Mona Lisa here.  She likes what she sees.      I'm happy to announce that my drawing, The Red House, is in an online show titled Seeing Music,  curated by Yvonne Lamar-Rogers and Cheryl Aden, sponsored by the curatorial committee of  the New York Artists Circle.        Here&#
Read more